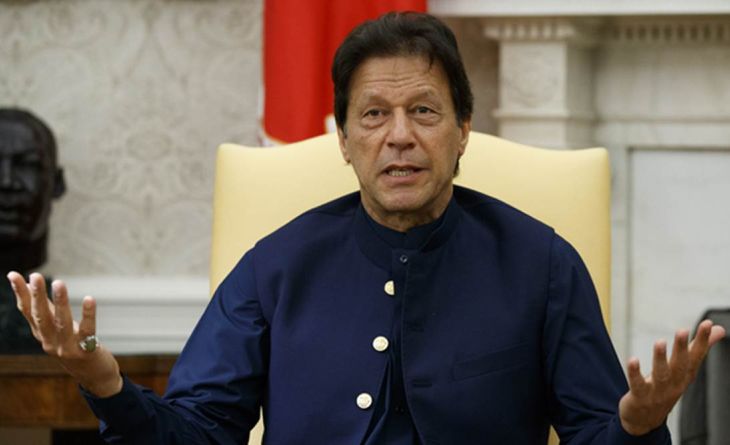 Pakistan has upped the rhetoric against India following the Narendra Modi government’s decision to defang Article 370 and abrogate Article 35A of the Constitution that gave special status to Jammu & Kashmir and bifurcate Jammu & Kashmir and Ladakh into two Union territories. Now, the Pakistani prime minister, Imran Khan, took to Twitter and attacked the Indian prime minister, Narendra Modi, and his Bharatiya Janata Party-led government, which he called “fascist” and “Hindu supremacist”.

In a series of tweets, on Sunday, Khan compared the Indian government to those who ruled Nazi Germany.

He said India has been “captured, as Germany had been captured by Nazis, by a fascist, racist Hindu supremacist ideology and leadership. This threatens 9 million Kashmiris under siege in IOK [Indian occupied Kashmir] for over two weeks which should have sent alarm bells ringing across the world with UN observers being sent there.”

India has been captured, as Germany had been captured by Nazis, by a fascist, racist Hindu Supremacist ideology & leadership.This threatens 9m Kashmiris under siege in IOK for over 2 weeks which shd have sent alarm bells ringing across the world with UN Observers being sent there

And the threat also extends to Pakistan, the minorities in India & in fact the very fabric of Nehru & Gandhi's India. One can simply Google to understand the link between the Nazi ideology & ethnic cleansing & genocide ideology of the RSS-BJP Founding Fathers.

Already 4m Indian Muslims face detention camps & cancellation of citizenship. World must take note as this genie is out of the bottle & the doctrine of hate & genocide, with RSS goons on the rampage, will spread unless the international community acts now to stop it.

The World must also seriously consider the safety & security of India's nuclear arsenal in the control of the fascist, racist Hindu Supremacist Modi Govt. This is an issue that impacts not just the region but the world.

• Naveen Patnaik says ‘BJP leaders visit Odisha only during elections’
• Jyotiraditya Scindia says ‘focusing on strengthening Congress in Uttar Pradesh’
• Rahul Gandhi says ‘Narendra Modi floundering because of arrogance, obsession with self-promotion’
• Mehbooba Mufti says ‘J&K will not be a part of India if Article 35A is removed’
• Narendra Modi says ‘I used to clean utensils and prepare food at RSS office’