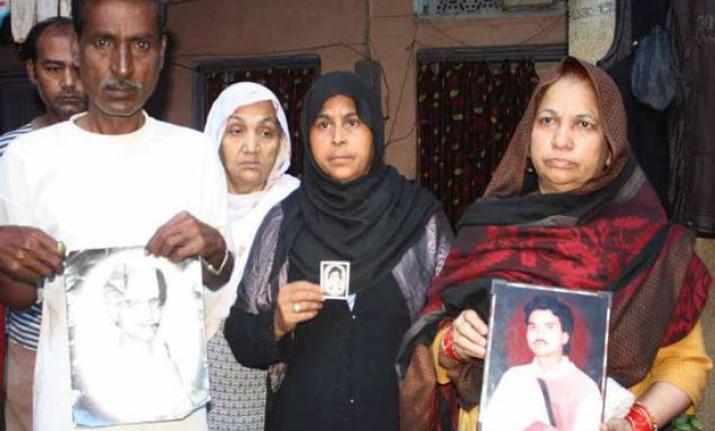 Some family members of the Hashimpura victims showing the photos of those who were killed or went missing.

New Delhi: The Delhi high court has convicted all 16 ex-policemen involved in 31-year-old Hashimpura massacre. The court, on Wednesday, has sentenced all the accused 16 policemen to life imprisonment. The court found them guilty of killing 42 Muslim men from Hashimpura area in Meerut, Uttar Pradesh, on the night of May 22, 1987.

All the 16 Provincial Armed Constabulary personnel, now retired from the services, had been charged for murder, kidnapping, criminal conspiracy and destruction of evidence under various sections of the Indian Penal Code.

A bench comprising Justice S Muralidhar and Justice Vinod Goel has dismissed the trial court’s verdict and convicted all the accused.

Earlier, the policemen were acquitted by the trial court from the charges of kidnapping and killing 42 persons. The petition had been filed in the high court challenging the trial’s court verdict.

On the night of May 22 or in the wee hours of May 23, 1987, around 45 Muslim men from the Hashimpura locality in Meerut were rounded up and loaded in a truck of the PAC and 42 out of them were killed and thrown in to the Upper Ganga canal in Ghaziabad district. The massacre took place after the PAC was called in to quell the communal riots that erupted in Meerut, in April 1987. However, by the time the massacre took place, the riots had subsided, although the atmosphere was extremely tensed.

During its judgment, the court also allowed BJP leader Subramanian Swamy’s plea to make public the report of Uttar Pradesh Police’s CB-CID, which probed the massacre. However, the court didn’t entertain Swamy’s plea for further probe by a special investigation team into the massacre. The court said as no significant developments took place or new leads unearthed, there was no need for a fresh SIT probe.

Swamy, who had also challenged the acquittal of the 16 policemen by the trial court, had also urged the court to order an investigation into whether the-then Union minister of state for home affairs, P Chidambaram, held a closed-door meeting in Meerut with PAC officers before the PAC personnel carried out the massacre of the 42 Muslim men. Swamy had also wanted a probe into whether the-then UP chief minister, Veer Bahadur Singh, had directed the PAC to carry out the killings.

The court, however, didn’t mention any of these pleas while pronouncing the judgment.