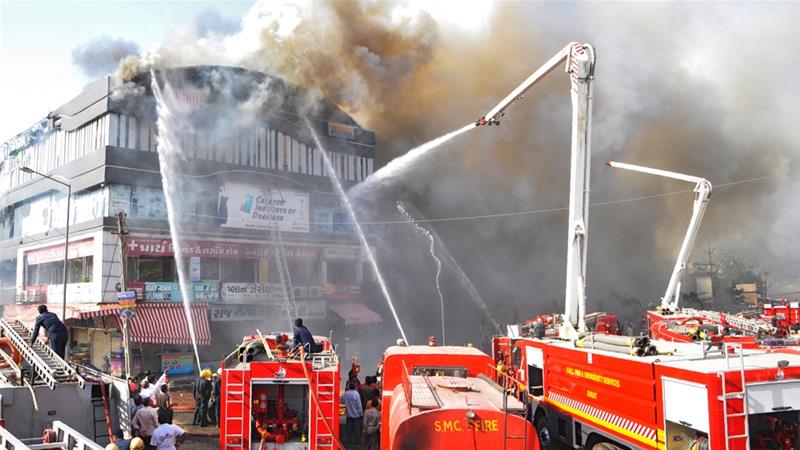 Firefighters at the site of the fire.

New Delhi: A major fire broke out at a coaching centre, on Friday, killing at least 20 students and injuring several of them, in Sarthana area of Surat, Gujarat. Some students jumped off the multi-storey building in an attempt to escape the inferno.

According to officials, at least 10 students on the third and fourth floors jumped to the ground to save themselves from the fire and smoke.

Meanwhile, an official of Surat fire control room said nineteen fire tenders and two hydraulic platforms were pressed into service to douse the fire and rescue those stuck inside the building, which took about an hour. The official added that no safety equipment was reportedly installed in the building.

While announcing a compensation of Rs 4 lakh for the kin of the deceased, Gujarat chief minister Vijay Rupani ordered an investigation into the incident by Mukesh Puri, principal secretary in the urban development department, and said the injured are being treated in various hospitals near the incident site.

Rupani also ordered a fire safety audit of schools, colleges and coaching centres across the state, and visited the injured children in hospitals.

Prime Minister Narendra Modi also expressed his anguish by the tragedy and tweeted: “Extremely anguished by the fire tragedy in Surat. My thoughts are with bereaved families. May the injured recover quickly. Have asked the Gujarat Government and local authorities to provide all possible assistance to those affected.”