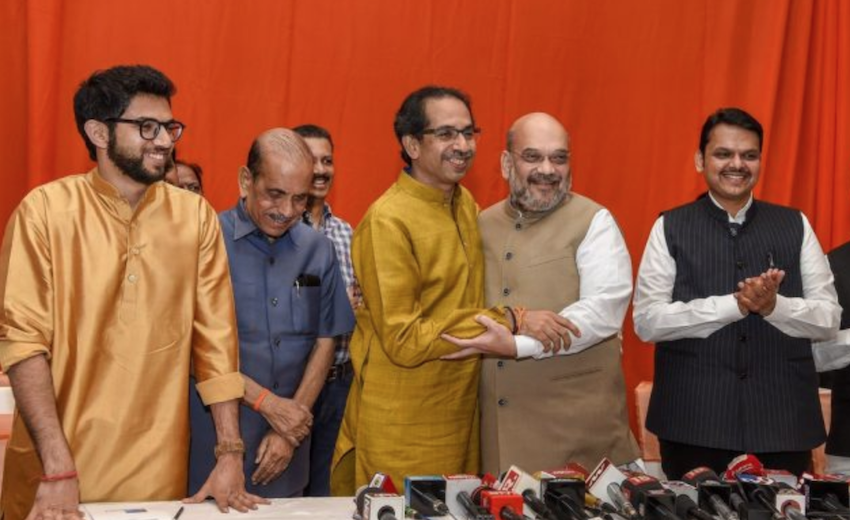 New Delhi: One of the oldest parties in Maharashtra, the Shiv Sena, on Monday, announced an alliance with the Bharatiya Janata Party for the upcoming Lok Sabha election. The announcement was made during a joint news conference addressed by the BJP national president Amit Shah, Sena chief Uddhav Thackeray and Maharashtra chief minister Devendra Fadnavis in Worli, Mumbai. Uddhav Thackeray’s son and Yuva Sena chief Aaditya and other Sena and BJP members were also was also present during the announcement.

This announcement comes despite the Sena, including its chief, hitting out at the BJP on a range of issues in recent times. The Sena attacks on the BJP were so severe that once, Uddhav Thackeray repeated Congress president Rahul Gandhi’s “chowkidar chor hain” slogan against Prime Minister Narendra Modi. In yet another notable attack, Shiv Sena senior leader Ramdas Kadam, while reacting to Amit Shah’s veiled threat of thrashing the Sena, said the Sena will “bury” the BJP in Maharashtra.

Fadnavis, during the news conference said, “Both parties have been together for over 25 years, and even though there have been some misunderstandings in recent times, the original ideology of both parties is the same — Hindutva. At a time when certain parties and individuals are posing a threat to national interest, it is important that parties with national interests should come together. This is the public sentiment and, therefore, we have decided to come together for the Lok Sabha and assembly elections.”

Sena chief Uddhav Thackeray too, while stressing on the need of union and understanding between both the parties, said, “We both have a history of 30 years but the last five years have been rough. However, we cannot allow misunderstanding between us to help those parties against whom we fought for 50 years to gain power back.”

According to the agreement, the BJP will contest 25 and the Shiv Sena will contest 23 out of 48 Lok Sabha seats in Maharashtra. Fadnavis promised Sena that the government is ready fulfil the demands made by the party including shifting of the Nanar Oil Refinery out of Ratnagiri due to opposition from locals, waiving off property tax for houses up to 500 square feet within Brihanmumbai Municipal Corporation limits and including more number of farmers in the state’s loan-waiver scheme.