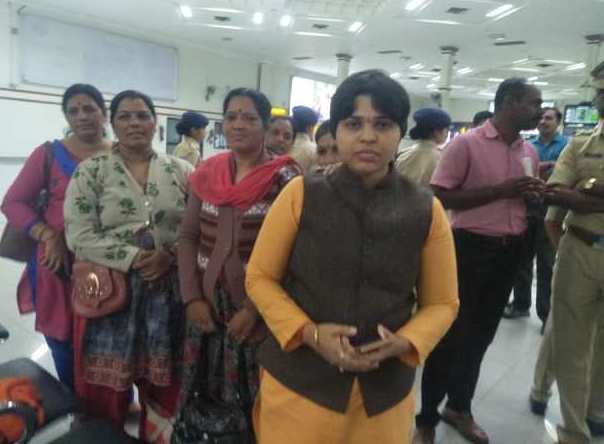 New Delhi: Women activist and Bhumata Brigade leader Trupti Desai along with six others had reached the Kochi airport on Friday at 4.45 in the morning. However, she was greeted by large number of police and CISF personnel and protesters at the airport.

Unable to make any headway, the activist had to return to Pune in the late evening without leaving Kochi airport amid the threat of deteriorating law and order situation. Earlier, protesters forced about a dozen women, who attempted to enter the famed shrine, to retreat.

Desai announced that she will return unannounced on a later date.

Talking to reporters at Kochi airport, Desai said, “I am not going back due to the protest of the faithful but respecting the request of the police. I will come back again to Sabarimala during this season without any advance notice.” Then criticizing the police, she said, “The police kept scaring us that the crowd outside was swelling and the possibility of violence cannot be ruled out. They said we cannot stay at the hotel as protesters might sneak in and cause us harm.”

She reiterated that she is seeking gender parity and right to pray peacefully, which is guaranteed by the Constitution, and don’t want any violence.

The Sabarimala temple opened on Friday for the two-month pilgrimage season since the Supreme Court allowed entry of women of all ages in the shrine.

Devaswom board to seek more time from court

Meanwhile, the Travancore Devaswom Board has decided to appeal to the Supreme Court to seek time to implement its verdict to allow women of all ages to enter the shrine. The board has also planned to alert the court about the destruction of facilities around Sabarimala caused due to the recent floods in Kerala.

While confirming the news, TDB president A Padmakumar said, “We appeal to the Supreme Court to give time to implement its verdict. Most importantly, we will point out to the court about the destruction of facilities caused due to the floods and also inform them about orders given by the state forest department and the Centre-empowered committees to not construct any more buildings in Pamba.”