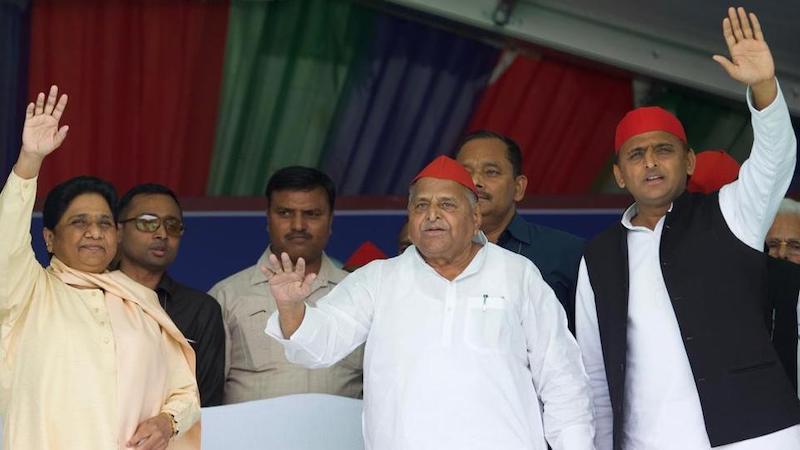 New Delhi: The Bahujan Samajwadi Party chief, Mayawati, shared a dais with Samajwadi Party patriarch Mulayam Singh Yadav after a long time at an election rally. The two longtime rival leaders came together at a SP-BSP joint rally in Uttar Pradesh’s Mainpuri – the SP bastion, on Friday. In the rally, which was held at the historic Christian College ground in the city, Mulayam Singh urged the crowd to respect the BSP chief and the BSP chief urged people to vote for Mulayam Singh.

The two leaders urging the people to back each other from the same platform gave the feeling that their decades-long rivalry has indeed ended. Mulayam Singh and Mayawati have been at loggerheads since 1995 when SP supporters had allegedly attacked the state guest house in Lucknow where Mayawati was staying with her supporters after she withdrew support for the SP-led government in Uttar Pradesh.

In the rally, Mayawati applauded Mulayam Singh and said, “Mulayam Singh Yadav, through his Samajwadi Party, has united the entire people of Uttar Pradesh. He is not fake OBC as Prime Minister Narendra Modi is.”

Mayawati first referred to the June 1995 guesthouse incident that started a bitter rivalry. This ended after the Bharatiya Janata Party won 71 out of the 80 Lok Sabha seats in the state, in 2014, riding on the Modi wave. The landslide victory of the BJP in the 2017 assembly election in the state forced the two parties closer. Mayawati said, “People must be wondering why I have come here to campaign despite the guesthouse case, but sometimes such difficult decisions need to be taken in public interest.”

She added that after Modi became prime minister, many Indians lost their jobs and many posts in various government departments are lying vacant.

On his part, the SP leader profusely thanked Mayawati for seeking votes for him and urged his supporters to always respect the dalit leader.

There had been rumours that the 80-year-old SP patriarch was reluctant to attend the rally. However, his son, Akhilesh Yadav, who is now the party’s leader, was able to convince his father. When Mulayam Singh got up to address the crowd, the crowd gave him a rapturous welcome shouting “Dadda! Dadda!” (grandfather) – which his supporters affectionately address him as. He said he welcomed Mayawati and he would always remain indebted to her.