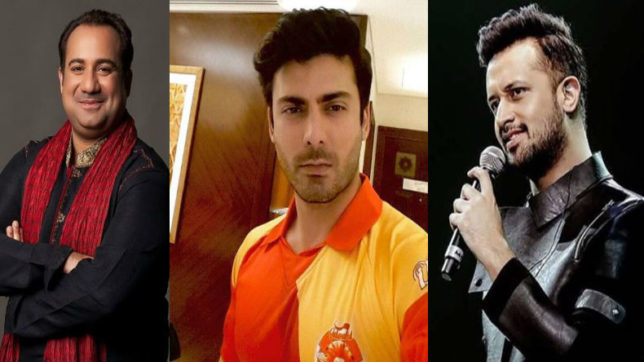 Rahat Fateh Ali Khan (L), Fawad Khan (C) and Atif Aslam are some of the Pakistani artists working in Bollywood.

New Delhi: While condemning Thursday’s gruesome Pulwama terror attack that killed over 40 CRPF men in Kashmir, the All Indian Cine Workers Association has declared a blanket ban on actors and other artists from Pakistan in Indian film industry.

The AICWA has also warned in its statement that the it will take strict action against any organization in the Indian entertainment industry that will work with Pakistan artists.

The notice issued by the AICWA reads, “All Indian Cine Workers Association strongly condemns brutal terrorist attack on our soldiers at Pulwama district in Jammu and Kashmir. Our heartfelt condolences to the families of the victims. AICWA stands with nation in confronting such terror and inhumanity. We are officially announcing a total ban on Pakistani Actors and Artists working in Film Industry. Still if any organisation insists on working with Pakistani Artists will be banned by AICWA and a strong action will be taken against them. Nation comes first, we stand with our nation [sic].” 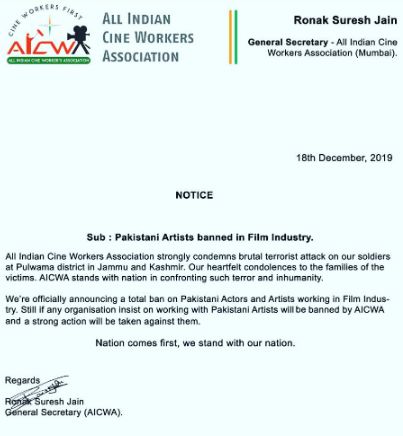 The AICWA notice banning Pakistani actors and artists from working in Bollywood.

Recently, many renowned Bollywood actors including Priyanka Chopra, Ajay Devgn, and Aamir Khan have condemned the terror attack, which a Jaish-e-Muhammed suicide bomber carried out. Veteran actor Amitabh Bachhan and Akshay Kumar have even offered financial assistance to the families of the CRPF jawans killed in the attack.

The jihadist attack on the CRPF convoy in Pulwama was one of the deadliest terror attacks in the history of Jammu & Kashmir.