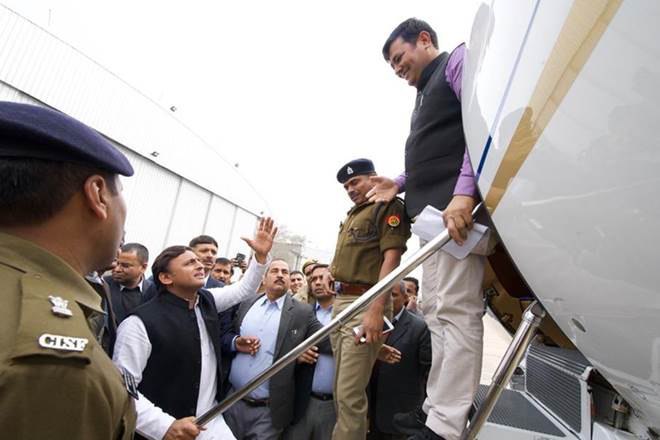 Akhilesh Yadav (with his left hand raised) while being stopped from boarding the flight. (Photo via Twitter)

New Delhi: Samajwadi Party chief Akhilesh Yadav was stopped from boarding a special flight to Allahabad at Amausi airport by Lucknow district administration. This triggered a political controversy and statewide protests by his party workers.

Yadav was headed to attend an Allahabad University Student’ Union event. However, Uttar Pradesh government authorities stopped him on the grounds that his visit in Prayagraj could lead to a law and order crisis.

This angered Samajwadi Party workers across the state. They took to the streets across Uttar Pradesh and where they engaged in fistfights with the police. As the protest turned violent, cops resorted to lathicharge. The Samajwadi Party member of Parliament from Badaun, Dharmendra Yadav, and several other, including four policemen were injured.

While targeting the state’s Yogi Adityanath government, Akhilesh Yadav said that the ruling BJP was not comfortable that he had to attend a lunch hosted by Akhara Parishad chief Narendra Giri at Kumbh Mela ground.

Bahujan Samajwadi Party chief Mayawati, Bengal chief minister Mamta Banerjee, Delhi chief minister Arvind Kejriwal and a host of other opposition leaders expressed their support to Yadav while decrying the BJP government at the Centre and the state.

Responding to the controversy, Uttar Pradesh chief minister Adityanath Yogi claimed the decision to stop Yadav was taken on the basis of Allahabad district authorities’ fear of law and order crisis in the Sangam City where the Kumbh Mela is going on.