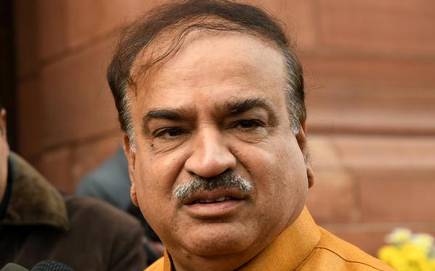 New Delhi: Union minister and veteran BJP leader Hubballi Narayan Ananth Kumar, 59, has died on Monday morning at a private hospital in Bengaluru. He was suffering from lung cancer and had been on ventilator in the last few days. He is survived by his wife Tejaswini and two daughters – Aishwarya and Vijeta.

The Karnataka government, as a mark of respect, has declared a three-day state mourning and holiday on Monday. The national flag will also fly at half-mast throughout the country to pay homage to senior BJP leader. A resolution was passed in the memory of Ananth Kumar in the meeting of Union Cabinet ministers headed by Prime Minister Narendra Modi.

The Karnataka chief minister, HD Kumaraswamy, while offering his condolences said, “Our families had a friendship beyond politics. He always valued and had given priority to friendship. I have lost a great friend in his death.”

The defence minister, Nirmala Sitharaman, tweeted: “Deep sense of grief on hearing that Shri Ananth Kumar is no more with us. He served BJP all along. Bengaluru was in his head and heart, always. May God give his family the strength to bear with this loss.”

Ananth Kumar, was a six-time member of Parliament from the Bangalore South Lok Sabha constituency. He was first elected in the Lok Sabha in 1996. As a student, he was associated with the Rashtriya Swayamsevak Sangh and its student wing Akhila Bharatiya Vidyarthi Parishad. He was also jailed during Emergency.

He was elected as the BJP’s Karnataka chief in 2003. He has served as Union minister of chemicals and fertilizers and Union minister for parliamentary affairs in the present government.

According to an official release, the central government announced a state funeral for Ananth Kumar. His funeral will take place on Wednesday.