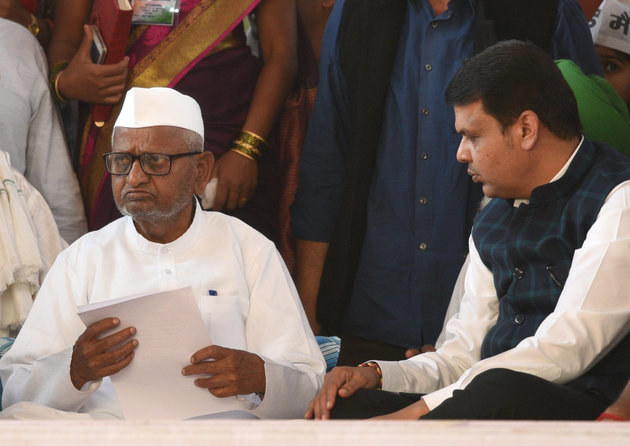 Hazare decided to break his fast and said he was satisfied with the promises made by the government. He said, “I’m satisfied with the promises and, hence, I want to break my fast. I had started the fast as I was pained that even though five years have passed since the Lokpal and Lokayuktas Act was enacted (in 2013), the Centre did not appoint a Lokpal. Also, I’m confident the new joint drafting committee for Lokayukta Act for Maharashtra that the government has agreed for will come up with a model draft.”

The meeting started at 2.15pm and continued till 7.40pm, after which Fadnavis emerged from the Yadavbaba temple where Hazare had been fasting. Talking to the reporters who were waiting outside, he announced that the government had managed to satisfy Hazare on all counts.

Fadnavis said the government had agreed to his three main demands, including appointment of a Lokpal, enacting a new Lokayukta Act for Maharashtra to replace the existing act, and giving autonomy to the Commission for Agricultural Costs and Prices.

Fadnavis further added, “On Lokpal appointment, we handed him a letter from the PMO that the search committee will hold its meeting on February 13 and start work to appoint a Lokpal as per Supreme Court directives. We also agreed to form a joint drafting committee, with civil society nominees by Hazare, for a new Lokayukta Act for Maharashtra. This draft will be presented for approval in the upcoming assembly session. For demands related to agriculture such as granting autonomy to the Commission for Agricultural Cost and Prices, adopting C2 + 50 formula to decide minimum support price, deciding prices of perishable farm produce, it was promised that a committee under the chairmanship of the agriculture minister will be formed, which will have Sompal Shastri as Hazare’s nominee and some members from NITI Aayog to deliberate and submit recommendations.”