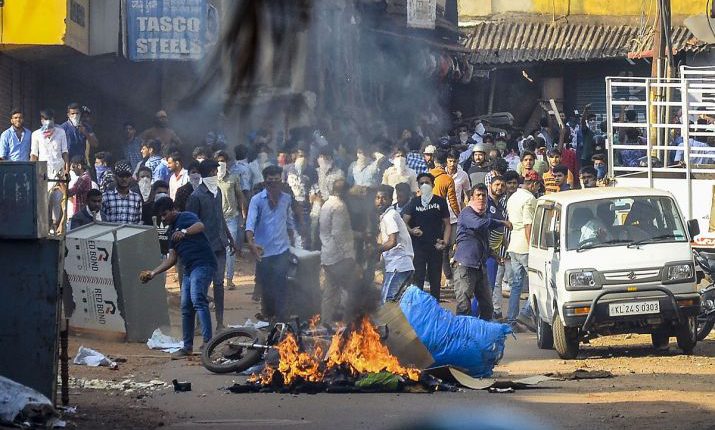 New Delhi: After the president, Ram Nath Kovind, signed the controversial Citizenship (Amendment) Bill, which was passed by Parliament, into law, protests erupted all across India against the new law, on Thursday, where protesters urged the government to repeal it. In some parts of the country, the protests turned into violence, in which lives were lost.

The new law – Citizenship (Amendment) Act, 2019 (CAA) – seeks to give non-Muslim refugees citizenship who have come from Afghanistan, Bangladesh and Pakistan to India before December 31, 2014. Activists and protesters termed the law as discriminatory and “anti-Muslim”, which is “against the secular principles” of India’s Constitution.

In Karnataka’s Mangaluru, two people were killed in police firing, on Thursday, when protests against the new citizenship law turned violent and protesters clashed with the police. Similar anti-CAA protests took place in multiple cities on Thursday tens of thousands of students, activists and others, defying prohibitory orders, took to the streets.

Violence too was reported from other cities, notably Lucknow and Patna. There were reports of arson and stone pelting as well. Hundreds of protesters were detained from across the country, including Delhi and Bengaluru. In Bengaluru, renowned historian Ramachandra Guha was among the protesters who were detained.

As police grappled with protesters, they had to resort to lathicharge and teargas firing.  Authorities also shut down mobile services in parts of the country, including parts of Delhi.

Section 144 of the Code of Criminal Procedure, which prohibits assembly of more than four people at the same place, was imposed on several states.

The opposition parties also joined forces to attack the Narendra Modi government on the new law which they said goes against the “idea of India”. However, the ruling Bharatiya Janata Party said there was no chance to roll back the new law and the National Register of Citizenship (NRC) will also be implemented across the country.

Rajasthan not to implement CAA, BJP to protest against move

Meanwhile, the Congress’s Ashok Gehlot-led Rajasthan government has said the amended citizenship law will not be implemented in the state. Reacting to this, the BJP state secretary, Mukesh Dadhich, said there will be a rally and demonstration in Jaipur to protest against the Rajasthan government’s decision. Later, a delegation of BJP leaders, including the BJP state president, Satish Poonia, submitted a memorandum to the governor.

Congress leader Rahul Gandhi, on Thursday, said the government has “insulted the soul of India” by suppressing its voice and preventing peaceful protests by shutting down mobile services and Metro stations.

Taking to Twitter, Gandhi said: “This government has no right to shut down colleges, telephones and the internet, to halt metro trains and to impose Section144 to suppress India’s voice and prevent peaceful protests. To do so is an insult to India’s soul.”

Meanwhile, the Uttar Pradesh chief minister, Yogi Adityanath, on Thursday, said his government will take “revenge” on those involved in the violence over the amended Citizenship Act by auctioning their property to compensate for the losses. Uttar Pradesh saw largescale protests and violence in the last two days over the CAA.

Adityanath said, “There is no place for violence in a democracy. In the name of opposing the CAA, the Congress, Samajwadi Party and Left parties have pushed the entire country to fire.” He said, “There was violence in Lucknow and Sambhal and we will deal with it strictly. Properties of those involved in damaging public assets will be seized and auctioned to compensate for the losses. They have been captured in video and CCTV footage. We will take ‘badla’ (revenge) on them.”