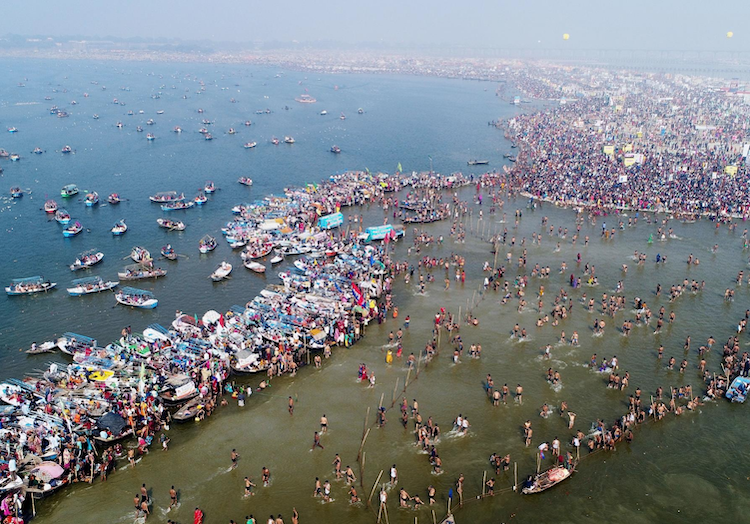 An aerial view of the Kumbh released by PIB India shows the hazy air over Sangam.

New Delhi: As the Kumbh – the spiritual cleansing event – starts in Prayagraj, a war effort to maintain cleanliness in the city leading towards the Sangam presents an awe-inspiring sight. Thousands of portable toilets are lined up, roads are constantly swept clean, clean drinking water flowing from newly installed taps, electric substations powering a massive tent city and billboards encourage a “clean Kumbh”. Despite all these, a potentially deadly problem looms over the holy city.

The skies over the Sangam, the confluence of the three sacred rivers in north India – Ganga, Yamuna and the mythical Saraswati, where millions of Hindu priests and pilgrims come to take a dip during the Kumbh with the belief that it will wash away their sins, this week, are thick with toxic dust.

During this Kumbh, authorities expect up to 150 million pilgrims to take a dip in the Sangam, including a million foreign visitors. The high level of air pollution is a sign that officials are struggling to grapple with India’s worsening air pollution.

According to the AQI India website, which tracks real-time pollution level in Indian cities, the air quality index, on Thursday, was 306, which is classified as “very unhealthy”. The PM2.5 count was 128µg/m³ and the PM10 count 137µg/m³.

During the eight-week festival at Allahabad, recently renamed Prayagraj, in Uttar Pradesh, visitors as well as authorities will be praying that while the confluence of the holy rivers wash away their sins, the air they breathe remains merciful.