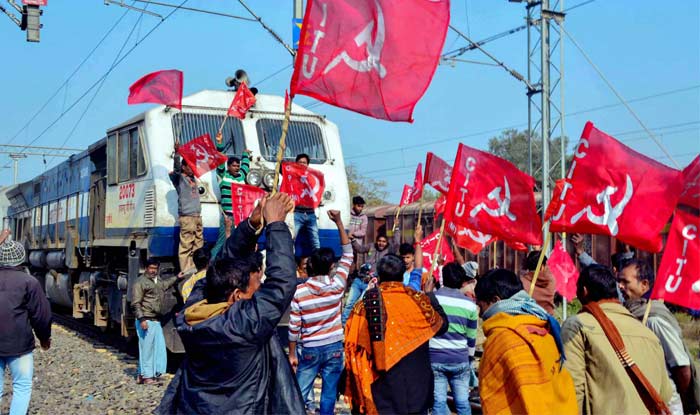 CITU members stop a train in West Bengal during the Bharat bandh.

New Delhi: The first day of the two-day Bharat bandh called by trade unions witnessed mixed response in the country, on Tuesday. West Bengal have been the most affected state with incidences of violence and disruption of public life due to paralyzed transportation. Kerala, Mumbai, Odisha and Rajasthan witnessed mixed response to the call for shutdown.

According to the Centre of Indian Trade Union (CITU), around 20 crore workers across the country from all the sectors are participating in the two-day strike. The bandh has been called in the protest of the Bharatiya Janata Party-led government’s alleged anti-people policies that only benefit corporates and big businesses.

“The unprecedented expanse and active participation of the workers in the two-day strike is a clear indication of the extent of anger and resentment of the workers against the neo-liberal policies and the attacks on their working and living conditions perpetrated by the government’s policies,” CITU stated in a statement.

“Road transport was seriously affected in most of the states, including Kerala, Karnataka, Maharashtra, Bihar, Haryana, Punjab, Uttarakhand. Though the railway employees did not join the strike, in several places they extended support,” the CITU claimed.

The bank unions have claimed that thousands of bank employees have participated in the strike affecting routine activities of the bank including cash deposit, withdrawals and cheque clearance. However, the activities in State Bank of India and other private sector banks were unaffected. Normal activities were seen at government offices and corporate sector except low attendance at some places.

Incidents of vandalism and clashes between Trinamool Congress workers and strike supporters were reported in some parts of the West Bengal. The effigies of Prime Minister Narendra Modi were burnt and stone pelting on the school bus has also been reported.

Road and rail services were disturbed in some places in Odisha and West Bengal as trade union activists called for “rail roko”. Large number of passengers were affected as trains were delayed.

At the same time, around 32,000 employees of the civic transport in Mumbai have called for an indefinite strike demanding hike in their wages. The Bharat bandh and strike by the transport employees affected daily commuters of Mumbai severely.

Rajasthan too has reported clashes between workers of manufacturing plant of Japanese company and police where 20 policemen were reported injured. On the other hand, union leaders have claimed 50 workers were injured in the clashes with police.