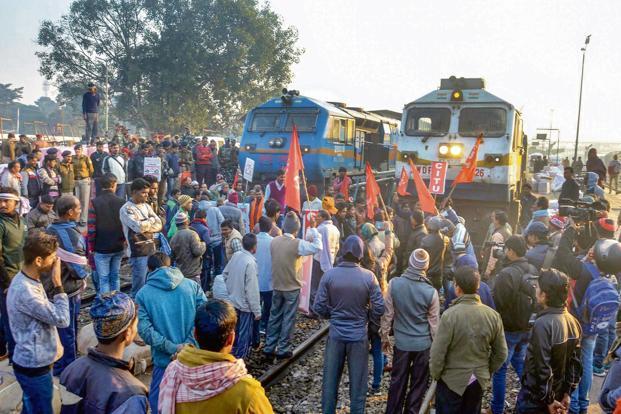 Members of a trade union seen blocking a railroad during the Bharat bandh.

New Delhi: On the second day of the two-day strike called by 10 major central trade unions, few incidences of violence have been reported along with rail blockage and shutdown of road transport services that paralyzed public life in many states. Around 22 crore workers under affiliated to the trade unions took part in the countrywide shutdown.

The Day 1 of the bandh, on Tuesday, witnessed sporadic violence and disruption of public life in many states.

Various major sectors of the country including telecom, health, education, electricity, banking, coal, steel, insurance and transport have supported the bandh, resulted in weakening of the routine life in few states.

Incidences of stone-pelting on the school buses have been reported in Howrah and other parts of the West Bengal. The similar incidences were reported on Tuesday in some parts of the state.

All India Bank Employees’ Association (AIBEA) and Bank Employees’ Federation of India (BEFI) have supported the strike affecting routine activities of the bank including cash deposit, withdrawals, cheque clearance, foreign exchange and remittance. However, the activities in State Bank of India and other private sector banks were unaffected. Normal activities were seen at government offices and corporate sector except low attendance at some places.

Railroad blockage affected daily commuters and travellers in mainly in states including Kerala and Odisha. Large number of passengers were affected as trains were delayed. Train services were also halted in Eastern Railway after strike supporters called for railroad blockage. Shops and commercial establishments were remained closed in some parts of Kerala.

Road transport was also seen affected in many states resulting in long queues of stranded passengers at bus stands. Along with Mumbai – where around 32,000 employees of the civic transport called for an indefinite strike demanding hike in their wages, Goa, Kerala, Odisha, and Karnataka have reported shutting of public and private road transport services.

The bandh has been called in the protest of the Bharatiya Janata Party-led government’s alleged anti-people policies that only benefit corporates and big businesses. According to the Hind Mazdoor Sabha general secretary, Harbhajan Singh Sidhu, the government has “ignored the demands” of unions and “failed to create jobs”. He has further claimed that farming associations, teachers and student organizations of various universities have also extended support for the strike.