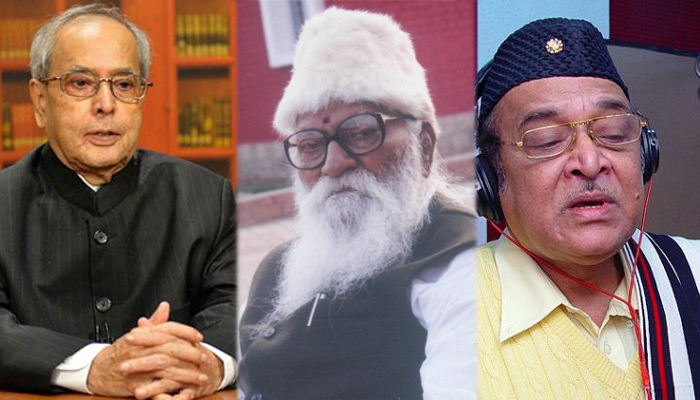 New Delhi: Bharat Ratna, India’s highest civilian award, was conferred upon former President Pranab Mukherjee. The award was also posthumously conferred upon Nanaji Deshmukh, one of the tallest leaders of the erstwhile Bharatiya Jana Sangh and Bhupen Hazarika, the legendary singer-composer from Assam.

Pranab Mukherjee, born on 11 December, 1935 and fondly known as “Pranab Da”, served as the 13th President of India, between 2012 and 2017. He has been a senior leader in the Congress along with several ministerial portfolios and was also the finance minister from 2009-2012 in Prime Minister Manmohan Singh’s Cabinet. Before the Bharat Ratna, he was conferred upon the Padma Vibhushan – India’s second-highest civilian award, in 2008.

Chandikadas Amritrao Deshmukh (October 11, 1916–February 27, 2010) was popularly known as Nanaji Deshmukh. He was the leader of the erstwhile Bharatiya Jana Sangh, which later became the Bharatiya Janata Party. He was and also a member of the Rajya Sabha. A Sangh Parivar veteran and social activist, Nanaji played an important role in the Bhoodan Movement started by Vinoba Bhave and was instrumental in carrying out social-restructuring programme in over 500 villages of Uttar Pradesh and Madhya Pradesh. Before the Bharat Ratna, Deshmukh was conferred upon the Padma Vibhushan, in 1999.

Bhupen Hazarika (September 8,1926–November 5,2011), popularly known as Sudhakantha, was a legendary singer and filmmaker. Born in Sadiya, Assam, he was known for his flawless baritone and his trademark Nepali cap. He was also known as the “Bard of the Brahmaputra”.

He also received the Padma Vibhushan, in 2012, among other awards.

The Padma Awards in three categories, namely, Padma Vibhushan, Padma Bhushan and Padma Shri, were also conferred for the year 2019, on Friday.

This year’s recipients are: