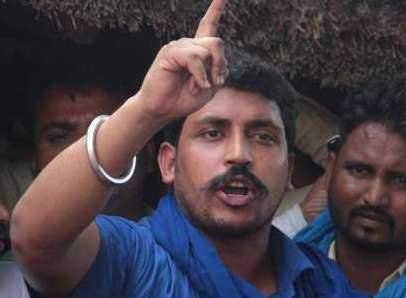 New Delhi: The Uttar Pradesh government, on Thursday, ordered the release of Bhim Army chief Chandrashekhar Azad ‘Ravan’, who was sent to jail, in June 2017, on charges under the National Security Act following the May 2017 Saharanpur inter-caste violence. One person was killed and 16 others were injured in the violence that took place in Saharanpur’s Shabirpur village, on May 5, 2017.

Chandrashekhar was granted bail by the Allahabad high court on November 2, 2017. However, one day later, he was arrested again under the provisions of the National Security Act and was sent to jail.

A spokesman of the Uttar Pradesh home department said that the state's decision to release Chandrashekhar ahead of time was taken on the basis of petition filed by Chandrashekhar’s mother, Kamlesh Devi. The spokesman said: “After going through the representation of Chandrashekhar's mother, it has been decided to release him early. Otherwise he had to stay in jail until November 1.”

The cycle of Saharanpur violence started on May 5 when a man was killed, many people were injured and about 25 houses of Shabirpur village were burned due to inter-caste strife. Since then, tension and violence in the district had been happening repeatedly. On May 9, an clash between policemen and rioters resulted in the damage of a dozen police vehicles. Twelve policemen were also injured. Chandrasekhar evaded arrest and escaped. A reward of Rs 12,000 on his head was announced. He was arrested from Himachal Pradesh the next month.

The cycle of violence continued before his arrest. On May 23, another person was shot dead and two others were injured, after which the state government suspended the Sharanpur senior superintendent of police and district magistrate while the divisional commissioner and inspector general was transferred.

Chandrashekhar is a resident of Chhutmalpur village near Shabirpur village, which was the epicentre of the inter-caste clashes. Although his Bhim Army’s goal was to give poor and dalit children free education in open school two years ago in Bhado village of Saharanpur, the outfit came to limelight during the Ambedkar Jayanti procession there when it was stopped by members of rajput caste.

Chandrashekhar’s popularity came in front of everyone when he mobilized thousands of dalits who gathered at the Jantar Mantar in New Delhi to protest against police action and atrocities by the upper castes, and also to demand the rights of dalits. It is said that the Bahujan Samaj Party’s top leader, Mayawati, got worried after the sudden rise of the Bhim Army under the leadership of Chandrasekhar Azad in the western Uttar Pradesh. Uttar Pradesh’s dalits form the core of Mayawati’s support base.

• Congress and AAP to form an alliance against BJP in Delhi for Lok Sabha election
• Priyanka Gandhi says Smriti Irani ‘distributed shoes to humiliate Rahul, but humiliated Amethi instead’
• In a major reform, Army to increase number of combat-worthy officers in forward units
• In West Bengal’s Bhatpara, clashes leave two dead, three injured
• Supreme Court to look into issue of compulsory reciting of Sanskrit and Hindi prayers in Kendriya Vidyalayas