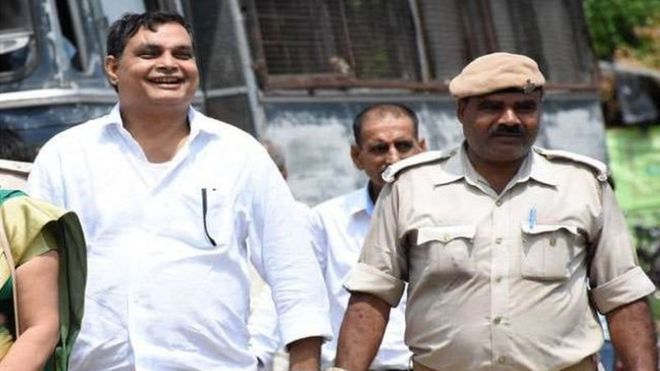 Brajesh Thakur (L) after his arrest.

New Delhi: The Supreme Court has ordered to transfer Brajesh Thakur, the main accused in the Muzaffarpur shelter-home horror case, to Patiala jail. He is currently lodged in Bihar’s Bhagalpur jail.

A bench comprising Justice Madan B Lokur, Justice Deepak Gupta and Justice S Abdul Nazeer in its order said, “Mr Brajesh Thakur be transferred to the prison in Patiala where he will be kept in watch by the superintendent of police. The movement of Brajesh Thakur should take place today or tomorrow on the outside.”

The decision was taken by the court after the Central Bureau of Investigation team has claimed that the accused has exerted influence in the jail, including the jail superintendent, and that he was also using mobile phone in his cell.

Earlier, the Patna high court had dismissed the anticipatory bail application for Manju Verma. While calling the failure to arrest her as a “horrible state of affairs”, Justice Lokur asked, “Her bail was rejected on October 9. Why have you not arrested her? ... because she was a cabinet minister? Nobody could trace her. Why was she not arrested?”

Justice Lokur has also questioned senior advocate Ranjit Kumar, who is representing the State of Bihar about the findings in the police report regarding inmates of the shelter home. “All kinds of weapons are found … What about drugs? Some sanity, sir … these girls (in the shelter) were being injected with drugs so that they can be raped? What is this going on?” he asked.

The bench has also directed the state government to demolish the building of the shelter home that was allegedly constructed by violating rules and regulations. The court has ordered the CBI to furnish name of CBI officers that were previously included in the investigating team and those who are at present in the team.

The horror story in the Muzaffarpur shelter home came to light when Bihar’s social welfare department filed an FIR based on an audit of the shelter home. The Tata Institute of Social Sciences in Mumbai conducted the audit. The report said around 34 girls, who were staying in the shelter home as inmates, were subjected to repeated and systematic sexual abuse. This has been going on for a long period of time. The case took a macabre twist with the CBI recovering the skeleton suspected to be of a girl missing from the home. This raised the suspicion that even murders might have taken place in the shelter home.