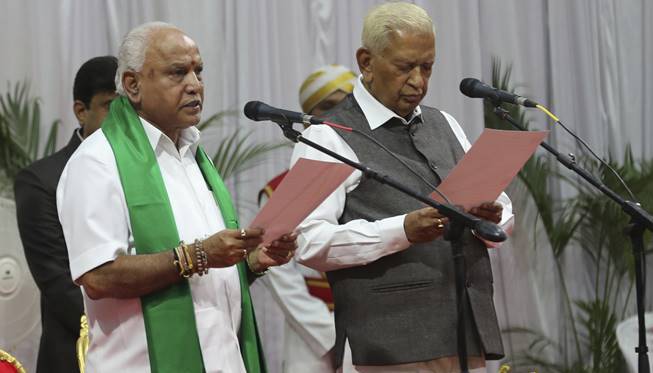 BS Yediyurappa (L) being sworn in as the Karnataka CM by Vajubhai Vala.

New Delhi: Karnataka Bharatiya Janata Party president BS Yediyurappa, on Friday, was sworn in as chief minister of the state for the fourth time, three days after the Congress-Janata Dal (Secular) coalition government collapsed after losing floor test. He assured that the appointments to his cabinets will be decided after discussing with the BJP president and Union minister, Amit Shah.

Earlier, on Friday, Yediyurappa, who reverted to the original spelling of his name from Yeddyurappa, which he changed in 2007 following the advice of his astrologer, met governor Vajubhai Vela to stake his claim for the post and urged him to administer the oath of office for the same evening. The swearing-in ceremony was attended by the state BJP leaders; however, no central party leaders were present at the ceremony. Interestingly, Congress and JD(S) leaders boycotted the oath-taking ceremony.

Yediyurappa, after meeting the governor, had said, “As instructed by our national president Shri Amit Shah ji and working president Shri JP Nadda ji, I have met his excellency the governor of Karnataka to stake claim to form government.”

He expressed confidence over winning the trust vote that will be held at a special assembly session on Monday.

BS Yediyurappa, 76, comes from Shimoga district’s Shikaripura town. His first stint in power came when helped was Janata Dal (Secular) leader HD Kumaraswamy to bring down the coalition government headed by the Congress’s Dharam Singh and form an alternative government with the BJP. The JD(S) and BJP entered into a deal in which Kumaraswamy would be the chief minister for the first 20 months, after which Yediyurappa would become the CM for the remaining 20 months. Yediyurappa became the deputy CM as well as Karnataka’s finance minister in the Kumaraswamy’s government then.

However, in October 2007, when it was Yediyurappa’s turn to become the CM, as per the deal, Kumaraswamy refused to relinquish his post. This forced Yediyurappa and all the ministers from his party to resign and the BJP formally withdrew the support to the Kumaraswamy government, on October 5, 2007. Karnataka came under President's rule which was revoked on 7 November 7, 2007 as the JD(S) and the BJP decided to come together again, and this paved the way for Yediyurappa to become the chief minister of Karnataka. Yediyurappa was sworn in as the 25th CM of Karnataka on November 12, 2007. However, JD(S) refused to support his government over disagreement on sharing of ministries which resulted in his resignation as CM, on November 19, 2007.

Currently, BJP has 105 MLAs compared to 78 of Congress 37 for JD(S), one BSP and one Independent in the 222-member assembly. The Karnataka assembly speaker, KR Ramesh Kumar, disqualified three rebel MLAs under the anti-defection law, on Thursday, until the end of the term of current assembly.

The JD(S) has also opposed the development. The JD(S) handle on social media said: “The strength of the house is 222 and the simple majority is 112 but Yediyurappa who has 105 MLAs has gone and staked claim and the governor has undemocratically decided in a minute without any doubts that the BJP has the numbers.”