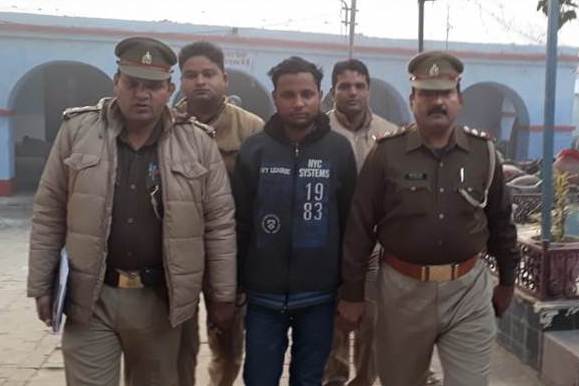 New Delhi: Nearly after a month of Bulandshahr violence over alleged cow slaughter, Yogesh Raj, the main accused in inciting mob violence and murder of police inspector Subodh Kumar Singh, has been arrested.

A Bajarang Dal activist, Raj was on the run for nearly for 30 days. According to reports, he was allegedly handed over to Uttar Pradesh Police by the leaders of Bajarang Dal. However, the police have claimed that they had laid a trap in Khurja near Bulandshahr after being tipped off by an informer and caught Raj.

Earlier, Raj had filed a police complaint of cow slaughter, on December 3, after five carcasses of cow were found and falsely implicated some people. He had even held a protest against the slaughter of the cows. The violence had been erupted during the protest after an argument between police and protesters intensified.

According to the police, inspector Subodh Kumar Singh had been chased, cornered, attacked by axe and killed by a mob of around 400 people. The mob was allegedly included activists of the Vishwa Hindu Parishad, the Bajarang Dal, and a member of the youth wing of the Bharatiya Janata Party.

The Uttar Pradesh administration have faced flak for delay in taking action against those who participated in the violence and killed the officer even after identifying the accused. Prashant Nutt, who allegedly shot the officer; Kalua, who allegedly attacked the officer with an axe; and Johnny, who had allegedly snatched the police revolver have been arrested and duly identified.