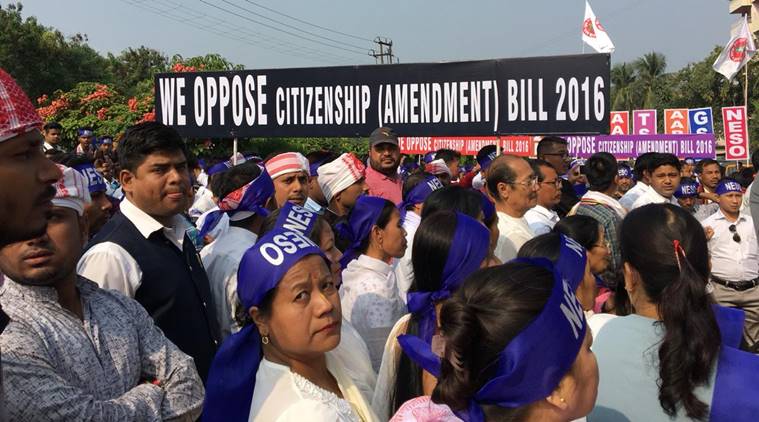 New Delhi: With protests against the Citizenship (Amendment) Bill, 2016 showing no signs of dying down in the northeast, the Union home ministry is now seeking to put the public’s fears to rest by saying that foreigners would not be granted Indian citizenship without the consent of state governments concerned. The Lok Sabha passed the bill on January 8.

Recently, even NEDA leaders, including chief ministers, and several Assamese cultural icons voiced their opposition to the bill.

Ashok Prasad, the home ministry spokesman, in a news briefing, said, “The mistaken perception in the northeast about the bill is creating insecurities (among the locals). The bill doesn’t give automatic citizenship to anybody. It brings a certain category of people from particular specified areas into the consideration zone with certain eased conditions. No one will become a citizen overnight.”

Prasad added that a proposal to “provide incentives to those people who want to settle anywhere in India, except in the northeast” is currently under consideration.

While the bill is being opposed across the northeast, in Assam, groups see it as a “threat” to the indigenous communities of the region as it goes against the Assam Accord. According to the groups of Assam, the bill that amends the Citizenship Act, 1955 goes against the 1985 Assam Accord provision that rules any person who enters Assam after midnight of March 24, 1971 would be considered as a foreigner. The recent NRC exercise in Assam was a key point in the 1985 accord.

The bill seeks to provide Indian citizenship to persecuted minorities, like Hindus, Sikhs, Jains, Buddhists and Christians, from Bangladesh, Pakistan and Afghanistan after they have stayed in India for seven years. It would be applicable to only those who came to India before December 31, 2014.

Prasad, while clarifying that not everyone is eligible, said, “It’s only applicable for people who belong to these communities from three countries, Bangladesh, Pakistan and Afghanistan, and who have been subjected to religious persecution. The inquiry undertaken by the state government will try to establish the person’s claim for the country of origin and the individual claim for religious persecution. Once the person’s application clears these two tests, the state government will consider and recommend his/her name for citizenship.”