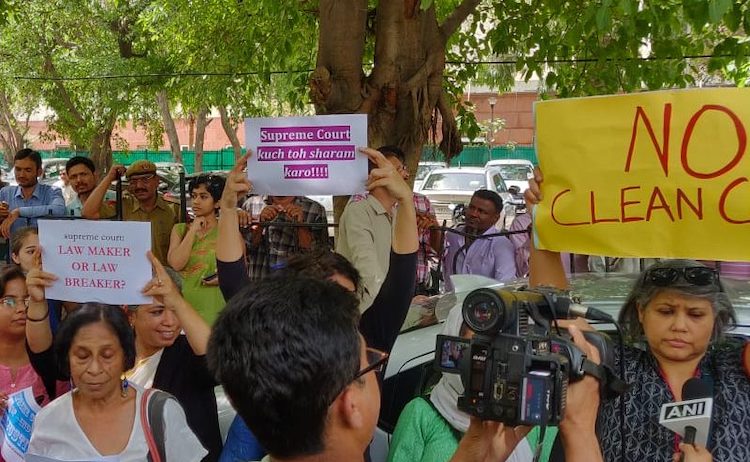 Protesters outside the Supreme Court.

New Delhi: A day after the Supreme Court in-house inquiry committee gave a clean chit to Chief Justice of India Ranjan Gogoi saying it had “found no substance” in her allegations of sexual harassment against him, the woman complainant, on Tuesday, wrote to the committee seeking a copy of the report.

The office of the Supreme Court secretary general, in a notice, on Monday, said that the in-house committee had submitted its report to the CJI and the next most senior judge, but the report as an in-house procedure “is not liable to be made public”.

However, the woman complainant, citing the Sexual Harassment of Women at Workplace (Prevention, Prohibition and Redressal) Act, 2013, underlined that “both parties have a right to receive the report”.

She said, “If a copy of the report is being given to the CJI directly or indirectly, I am entitled to a copy thereof in any case,” and added, “I find it rather strange that the complainant in a case of sexual harassment is not to be provided with a copy of the report which finds her complaint to be without substance and that my complaint has been held by the committee to be this without giving me any reasons for the same.”

Meanwhile, on Tuesday, several activists and a group of lawyers were protesting against the procedure adopted by the three-judge panel, led by Justice SA Bobde, and when the things started going out of control as the police tried to disperse the gathering; some journalists who went to cover the proceedings were also detained by police personnel, under Section 144.

Security outside the top court’s premises has also been increased.

While the journalists covering the protest have been released, over 30 women activists have been detained by the police at New Delhi’s Mandir Marg police station.

The National Federation of India Women general secretary, in an interaction with media, said the protest was being held to question the method adopted by the in-house investigation panel which gave a clean chit to Ranjan Gogoi.