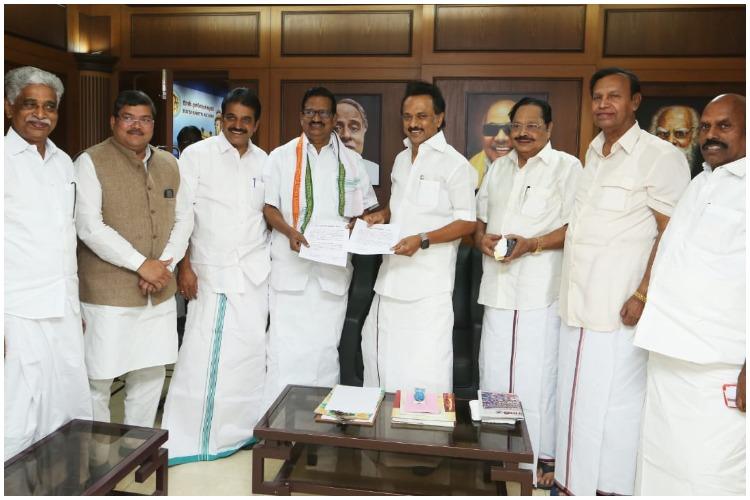 MK Stalin (4R) and KC Venugopal (4L) during the announcement of their alliance.

New Delhi: Parties are gearing themselves up for the 2019 Lok Sabha election and seeking alliances. With just a day after formal announcement of the ruling All India Anna Dravida Munnetra Kazhagam-Bharatiya Janata Party alliance in Tamil Nadu, its rival party in the state, the Dravida Munnetra Kazhagam, on Wednesday, has declared its alliance with the Congress. The Congress has been allotted total of 10 seats, out of which, the party will contest nine seats in Tamil Nadu and one seat in Puducherry. Tamil Nadu has 39 Lok Sabha seats.

According to the report, other parties including the Viduthalai Chiruthaigal Katchi, Marumalarchi Dravida Munnetra Kazhagam and the Left parties are also likely to join DMK-Congress alliance.

MK Stalin, the DMK chief, while announcing the alliance at its headquarters, said, “For the 2019 elections, I, the DMK chief and Congress chief KS Alagiri have held discussions. We are giving 10 seats to the Congress.”

Congress general secretary KC Venugopal, who along with Congress election in charge for Tamil Nadu Mukul Wasnik, met Stalin to discuss seat-sharing between two parties, said, “The country very much needed this alliance. The country is disappointed at Narendra Modi. What he promised in the election, nothing has been fulfilled in the last five years ... We are not first-time allies. Congress and DMK are long-term partners … We are expecting a very good result in Tamil Nadu. We are expecting 100 per cent result in Tamil Nadu. We are going to have a very strong victory in Tamil Nadu. In the coming days we will finalise which seats we are going to contest.”

The AIADMK, on Tuesday, has formally announced its alliance with the national ruling party the BJP and Pattali Makkal Katchi for the upcoming general election and anticipated by-polls in the state. The BJP will contest from five seats and PMK will contest from seven seats.