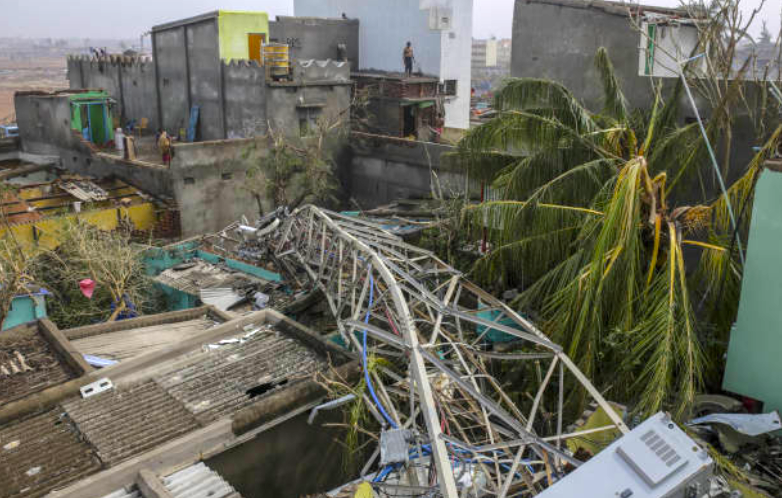 A neighbourhood in Puri district after Cyclone Fani made landfall.

New Delhi: After making landfall and causing panic in Odisha, on Friday, Cyclone Fani has entered West Bengal on Saturday. This is one of the strongest storms to batter the Indian subcontinent in ten years. The cyclone resulted uprooting of trees and triggered rains in Bengal on Friday night through Saturday. No loss of life or any major damage has been reported in the Bengal so far.

The death toll due to the cyclone mounted to 12 from eight on Friday night with four fresh casualties reported from Odisha’s Mayurbhanj district, officials said. They added detailed information from many areas was still awaited. Odisha has witnessed wind gusts with speeds up to 200 kilometres an hour. This caused massive destructions and resulted uprooting of thousands of trees, knocking down of power, water and telecommunication lines.

Cyclone Fani moved northeastwards into Bangladesh on Saturday where five people have been reportedly killed. News agency Reuters said about a million people were evacuated to safer places.

‘No damage in Bengal’

West Bengal chief minister Mamata Banerjee, on Saturday, said except for damaging a few huts, Cyclone Fani “did not cause much damage” in her state.

Odisha chief minister Naveen Patnaik, on Saturday, said “a record 1.2 million people were evacuated in 24 hours” and claimed it was the “biggest human evacuation in history”, according to a news agency.

Patnaik appreciated each and every one of the 4.5 crore people who are involved in the entire process, the evacuees and rescuers as he appreciated volunteers and officials working round the clock to minimize the effect of Fani.