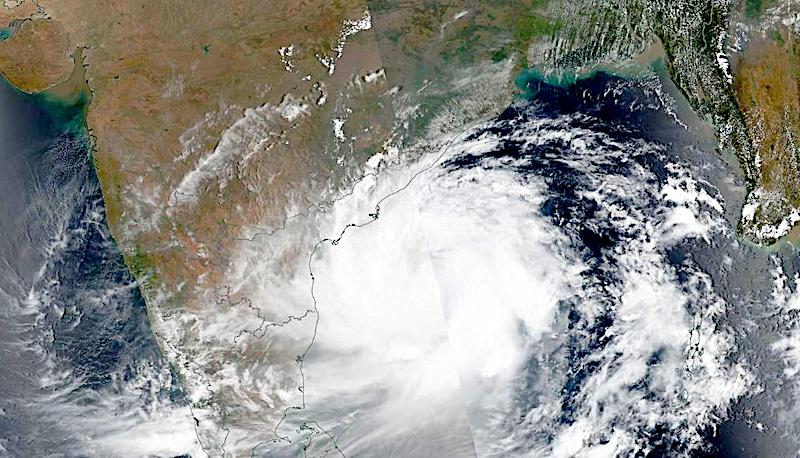 A satellite image showing Cyclone Fani over the Bay of Bengal.

New Delhi: Cyclone Fani is expected to make landfall in Odisha around Friday noon. The Category 4 hurricane has now intensified into an “extremely severe cyclonic storm” with wind speed likely to hit 200kmph at the time of landfall. The central as well as state government have put the disaster-relief machinery, including the NDRF, SDRF and armed forces on high alert.

The Odisha government is currently evacuating 8 lakh people from low-lying areas in the state. The cyclone is currently over 350km off the Odisha coast.

According to the latest India Meteorological Department report, Fani is likely to make landfall between Chilika and Puri during the forenoon hours of May 3 (Friday) during the 10am–12 noon period.

The storm, which is moving at a speed of 12 kilometres per hour at this moment, would accompany wind speeds in the range of 170–180 km as it launches itself onto the land. Currently, it is about 360km southeast of Puri, on the Bay of Bengal.

Taking into consideration of Fani, the Odisha government is evacuating people on a war footing where the cyclone is likely to have its severest impact. Priority is being given to women, children, elderly and disabled people during evacuation.

The chief minister of Odisha, Naveen Patnaik, told reporters that his government is ready to tackle the storm and its damage. Emphasis is given on measures to prevent loss of life.

IMD said extensive damage is expected in the districts of Ganjam, Puri, Khurda, Gajapati and Jagatsinghpur while damage is also expected in Kendrapara, Bhadrak, Jajpur, Balasore and other interior and south Odisha districts and asked the state government to take proper measures accordingly.

Officials of Odisha State Disaster Management Authority said, as many as 3,001 transit shelters including 879 multipurpose cyclone shelters have been made functional to accommodate affected people.

Meanwhile, Prime Minister Narendra Modi chaired a high-level meeting to take stock of the preparedness for Cyclone Fani. According to media reports, he was briefed on the ongoing measures that are being taken there. These include the provision of adequate resources, deployment of teams from NDRF and the armed forces, arrangements to provide drinking water, and backup systems to restore power and telecom services.

After the review meeting, Modi directed senior officials to maintain close cooperation with officers of affected states to ensure effective measures for relief and rescue operations.