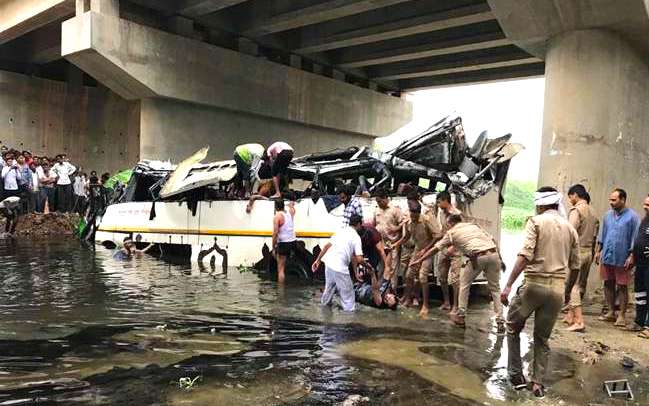 Police and villagers are seen pulling out a body from the ill-fated bus.

New Delhi: A Uttar Pradesh Roadways “Janrath” bus, on Monday, fell into a drain after skidding off the Yamuna Expressway near Agra resulting in the loss of lives of 29 people and leaving several others injured.

The bus, which belonged to the UP Roadways’ Awadh Depot, was going to New Delhi from Lucknow. According to media reports, as many as 44 people were on board when the bus skidded off the expressway and fell into the drain.

Villagers from nearby Baghel Thar village were the first to help and rescued many passengers before the police and paramedics arrived. The injured have been moved to hospitals.

Agra district magistrate NG Ravi Kumar, while talking to reporters, said, “The incident took place around 4.30am. The driver probably slept off on the steering wheel and the speeding bus broke the barrier and fell into the drain. Search operations are under way.”

President Ram Nath Kovind and Prime Minister Narendra Modi took to twitter and conveyed condolences to families of the 29 people.

Sad to learn about tragic bus accident on the Yamuna Expressway in Agra, Uttar Pradesh. State government taking all steps to help affected people. My condolences to bereaved families; wishing an early recovery to those injured #PresidentKovind

Pained by the bus accident in Agra, Uttar Pradesh. Condolences to the families who have lost their loved ones. I pray that those injured recover fast. The State Government and local administration are providing all possible assistance to the affected.

The Uttar Pradesh chief minister, Yogi Adityanath, expressed his grief and condolences on the death of passengers and directed the district magistrate and senior superintendent of police to provide all possible medical attention to the injured.

Adityanath has also ordered an inquiry by a panel, which includes the Uttar Pradesh transport commissioner, divisional commissioner and the inspector general of the Agra Police Zone to investigate the incident within 24 hours and submit a report on the accident. He also reportedly sought a paper with long-term recommendations so that such accidents don’t happen in the future.

UP Roadways has also announced ex gratia of ₹5 lakh to the family of the deceased.