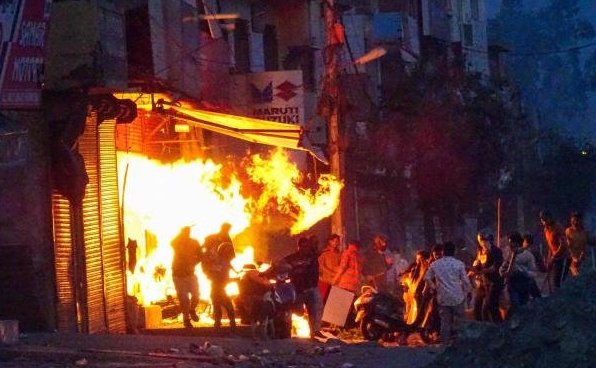 Rioters setting fire to a shop in northeast Delhi.

New Delhi: The death toll in the three days of violence in Delhi reached 27 according to the latest figures on Wednesday. The clashes started on Sunday between a Muslim group protesting against the Citizenship Amendment Act and a Hindu group supporting the new citizenship law.

This the worst communal violence in the city since the anti-Sikh pogrom of 1984, which started after the assassination of the-then prime minister, Indira Gandhi. During the pogrom, nearly 3,000 Sikhs were killed and hundreds of their houses and business establishments were burned down.

The prime minister, Narendra Modi, appealed for peace in a tweet even as chilling images of the violence started appearing on social media. Modi said he had reviewed the situation and security personnel, which included the Delhi Police and central paramilitary forces, were working to restore normality.

Photographs and videos circulated on social media showed graphic images of the violence, including mob beating helpless individuals and injured journalists. In some videos, policemen appeared to be aiding one group of rioters during the violence.

The violence centred mostly around Muslim-majority neighbourhoods, like Bhajanpura, Chandbagh, Jaffrabad, Khureji Khas, Maujpur and Shiv Vihar, in northeast Delhi. Access to media in these areas was severely restricted. Some relief groups also complained of not being allowed to go into these areas with relief material to the violence-hit people.

Meanwhile, the leader of the opposition Congress party, Sonia Gandhi, called for the resignation of the Union home minister, Amit Shah. She accused Shah of being “responsible” for the violence that has left 27 dead and nearly 200 injured in the last three days.

The death toll is likely to rise as hospitals have received several dozen people with serious injuries sustained during the riots in various parts of northeast Delhi.