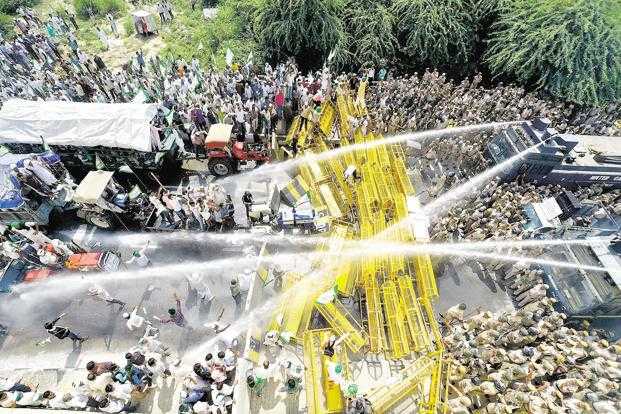 Police use water cannons against farmers at a barricade near the Delhi-UP border in Ghaziabad.

New Delhi: The protesting farmers who has been walking from the past 10 days from various states of the country to Delhi were stopped at the Delhi-Uttar Pradesh border, on Tuesday, by policemen with water cannon and teargas. On that day, Prime Minister Narendra Modi was celebrating the birth anniversary of Mahatma Gandhi, who taught the world the virtues of of non-violence, and also the birth anniversary of Lal Bahadur Shastri, who had given India the “Jai Jawan, Jai Kisan” slogan.

Some farmers and 7 policemen were injured in clashes between the police and the protesting farmers. This comes before major state elections and the 2019 general election.

After talks with government officials, BKU’s spokesman Yudhvir singh claimed that the government had agreed to meet 7 out of the 11 demands made by the farmers. There were no agreements on the key issues like minimum support price and loan waiver or the implementation of the Swaminathan Committee report.

The farmers stood at the Delhi-UP border during the night, due to which the Ghaziabad administration decided to keep schools closed on Wednesday. After watching the protesting farmers marching from Haridwar to Delhi border non-violently, people sought answers on who had instructed the Delhi Police, who reports to the central government, to prohibit the farmers from entering the capital.

The farmers marched on National Highway-24 on their foot and tractors. The Delhi Police said that the court has imposed a ban on tractors on the capital’s street, due to which the farmers were prohibited from entering the capital. The police further said that they had used water cannons and teargas in a limited way on the farmers when the farmers tried to break three barricades with their tractors. Some protesters had also used stones and sticks against the deployed policemen, due to which some policemen were injured.

Smabhimani Paksha president Devappa Anna Shetti (known as Raju Shetti) said, “Farmers are neither terrorists nor Naxalites, they just came with their demands. Don't they have the rights to do that? The government of Shivraj Singh Chouhan had murdered few farmers in Mandasaur (in Madhya Pradesh), today he is at the stage of losing the assembly election.”

Warning Modi, he said if there were such injustices on the farmers, the prime minister would lose to Delhi soon.

Shetti was ousted from the NDA coalition at the beginning of this year for opposing the government for failing to fulfil the promises he made to farmers in his election manifesto.

Meanwhile, backing the farmers, Delhi chief minister Arvind Kejriwal tweeted: “Delhi belongs to everyone. Farmers cannot be stopped from visiting Delhi. They have legitimate demands and those must be completed.”

While condemning the police actions on the farmer’s protest, Akhil Bhartiya Kisan Sabha (AIKS) in a statement said, “The real face of the most anti-peasant government has been uncovered.” It further said that it is common in Madhya Pradesh, Assam and Jharkhand for policemen to open fire at farmers protesting march.

It said: “On the one hand, Narendra Modi-led BJP government tries to tell itself as a proponent of the farmers by spending millions of rupees on publicity. On the other hand, farmers’ protest and demands are settled insensitively.”