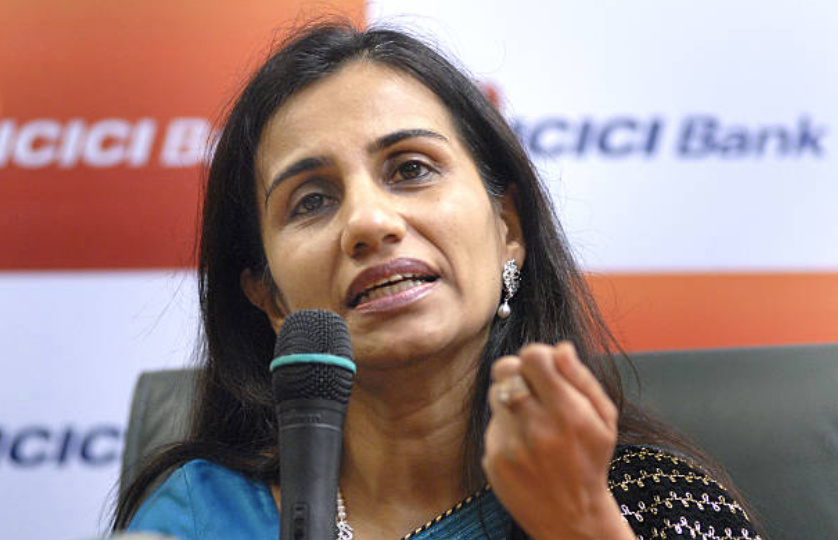 New Delhi: The ICICI Bank board of directors, after considering the findings of an investigation conducted by retired Supreme Court judge Justice N Srikrishna, has decided to take back all bonuses given to her between April 2009 and March 2018, and also cancel all benefits and stock options. The Central Bureau of Investigation has recently booked Kochhar, her husband Deepak and Videocon promoter Venugopal Dhoot and name several other top bankers who were associated with ICICI Bank for banking fraud.

The bank has issued a statement, on Wednesday, saying: “After due deliberations, the Board of Directors decided to treat the separation of Ms Chanda Kochhar from the Bank as a ‘Termination for Cause’ under the Bank’s internal policies, schemes and the Code of Conduct, with all attendant consequences (including revocation of all her existing and future entitlements such as any unpaid amounts, unpaid bonuses or increments, unvested and vested & unexercised stock options, and medical benefits), and require the clawback of all bonuses paid from April 2009 until March 2018, and to take such further actions as may be warranted in the matter [sic].”

Justice Srikrishna was appointed by the board to investigate the allegations of conflict of interest against Kochhar. According to the report, first published by Indian Express in March 2018, the ICICI Bank had given a loan of Rs 3,250 crore to the Videocon Group in 2012. After six months of getting the loan, the Videocon Group promoter Venugopal Dhoot has diverted some crores of rupees towards a firm he has set up with Deepak Kochhar, husband of Chanda Kochhar and other two relatives. The Videocon account was declared a non-performing asset as loan of Rs 2,810 crore remain unpaid.

The report submitted by Justice Srikrishna has found Kochhar guilty of violating the lender’s code of conduct. Sriskrishna has mentioned in his report that Kochhar has showed lack of diligence in dealing with due disclosure and recusal requirements.

Chanda Kochhar who has been with the ICICI bank for 34 years, expressed shock and disappointment by the decision.

In a statement, on Wednesday, she said: “I have not been given a copy of the report. I reiterate that none of the credit decisions at the bank are unilateral. ICICI is an institution with established robust processes and systems which involve committee based collective decision making with several professionals with high calibre participating in the decision making. Hence the organization design and structure obviate the possibility of conflict of interest.”

She added, “I have pursued my career as an independent professional with utmost honesty, dignity and integrity. I continue to have faith and belief in my conduct as a professional and I am certain that truth will ultimately prevail.”

Meanwhile, the experts in security laws have predicted that the Securities and Exchange Board of India may initiate some action against Kochhar for violation of related party disclosures.