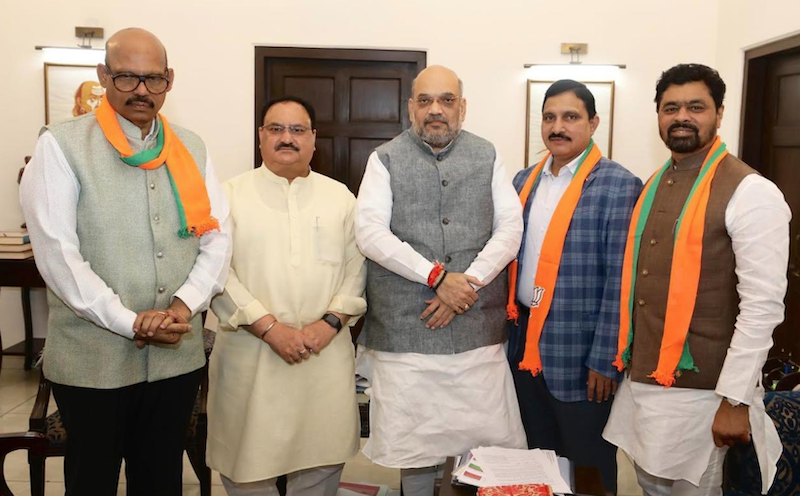 In this photo tweeted by the BJP, 3 out of the 4 TDP MPs who defected to the BJP are seen with Union home minister Amit Shah (C) and BJP working president JP Nadda (2L).

They joined the ruling party at the Centre in the presence of Union home minister Amit Shah and the BJP working president JP Nadda.

Chandrababu Naidu was dealt with this blow at a time when he was in Europe on a holiday with his family. They are coming back on June 26.

During a news conference, Nadda said the MPs were thinking for a long time to take the country forward under the leadership of Prime Minister Narendra Modi and that they have joined the BJP for the development of Andhra Pradesh.

Talking to reporters, TG Venkatesh said, “We all took this decision when we felt that the sympathy and support of the people was with the BJP. We have joined BJP due to the concerns of development of Rayalaseema. In college days, I was an active member of ABVP, so BJP is not a new party for me.”

Out of the four who joined the BJP, CM Ramesh and YS Chowdary have been under the scanner of the income-tax department, CBI and Enforcement Directorate.

While Ramesh’s name came during a tussle in the CBI between then Director Alok Verma and Special Director Rakesh Asthana and an I-T probe investigation regarding a company that is said to be linked to him, Chowdary has been on the radar of the CBI and ED in an alleged bank loan fraud case.

Interestingly, BJP MP and spokesperson GVL Narasimha Rao had called Chowdary and Ramesh “Andhra Mallyas” and wrote to the Rajya Sabha Ethics Committee, to seek “suitable action” against them, in November 2018.

However, in the past, both have claimed innocence, and denied any wrongdoing.