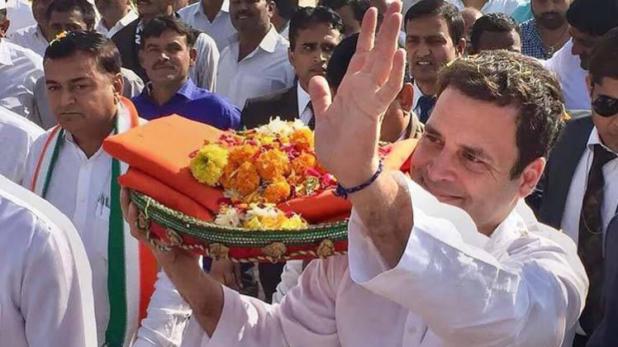 New Delhi: Congress president Rahul Gandhi, who is on two-day tour of his parliamentary constitution in Amethi, was welcomed by his supporters as “Shiv bhakt (Shiv devotee)” in Amethi, on Monday. On his arrival, local kanwarias (Shiv devotees who go on annual pilgrimages to pour holy water on Shiv idols and Shivlingas) welcomed Gandhi amid chants of “Bumm Bumm Bole!”

They also presented him with a saffron stole an image of Lord Shiva. The Uttar Pradesh Congress unit had put up hoardings and banners declaring Gandhi as a Shiv devotee and put cutouts and idols of the Hindu god on the stages where from where he addressed his supporters.

This move is seen as an attempt by the Congress to win Hindu votes in the 2019 Lok Sabha election.

The Congress district president, Yogendra Mishra, said, “It would be his first visit after coming back from Kailash Mansarovar, so certainly everyone has planned a grand welcome for him, especially at Fursatganj.”

During one of his meetings, while addressing his supporters, Gandhi accused the prime minister, Narendra Modi, of “snatching away money from the poor and handing it over to Anil Ambani” in the Rafale warplane deal with France, which the Congress and other opposition parties have dubbed as a “scam”. Gandhi said, “The chowkidar of the country has taken out Rs 20,000 crore from the pockets of the poor, martyrs and the jawans and put it in the pocket of Ambani.” During his election campaign for the 16th Lok Sabha, Modi had said he will keep an eye on the country’s treasury as a “chowkidar (watchman)” and won’t allow any thief to steal from it.

In Amethi, Congress chief is scheduled to lay the foundation stone for projects undertaken through his local area development funds, at Jias area. Gandhi will address a women’s self-help group at near the Fursatganj area. Then he will attend a meeting with about 150 gram pradhans from different areas of the constituency. Before leaving for Delhi, on Tuesday, he will participate in a meeting of district vigilance and monitoring committee. Apart from that, Gandhi is likely to attend “prabhat pheri”, where party workers will reach out to villagers and spread the message of peace and communal harmony, which would start on Tuesday and culminate on Gandhi Jayanti, on October 2.

Meanwhile, the BJP attacked Gandhi over the title of “Shiv Bhakt” and reminded the public of the “saffron terrorism” remark Gandhi made a few years ago before a US official, as revealed by a WikiLeaks release. BJP’s spokesman Sambit Patra, “This is the same Rahul Gandhi who invented the word ‘saffron terrorism’, suddenly, today, he has become a Shiv devotee. But, he cannot fool the common man and people are watching his ‘fancy dress’ Hinduism.”

Gandhi’s Amethi visit comes just after Union minister Smriti Irani’s two trips there in the first week of this month, during which Irani had criticized Rahul Gandhi for alleged negligence of his constituency. In the 2014 Lok Sabha election, Gandhi had defeated BJP’s Irani in the constituency by 1.07 lakh votes.