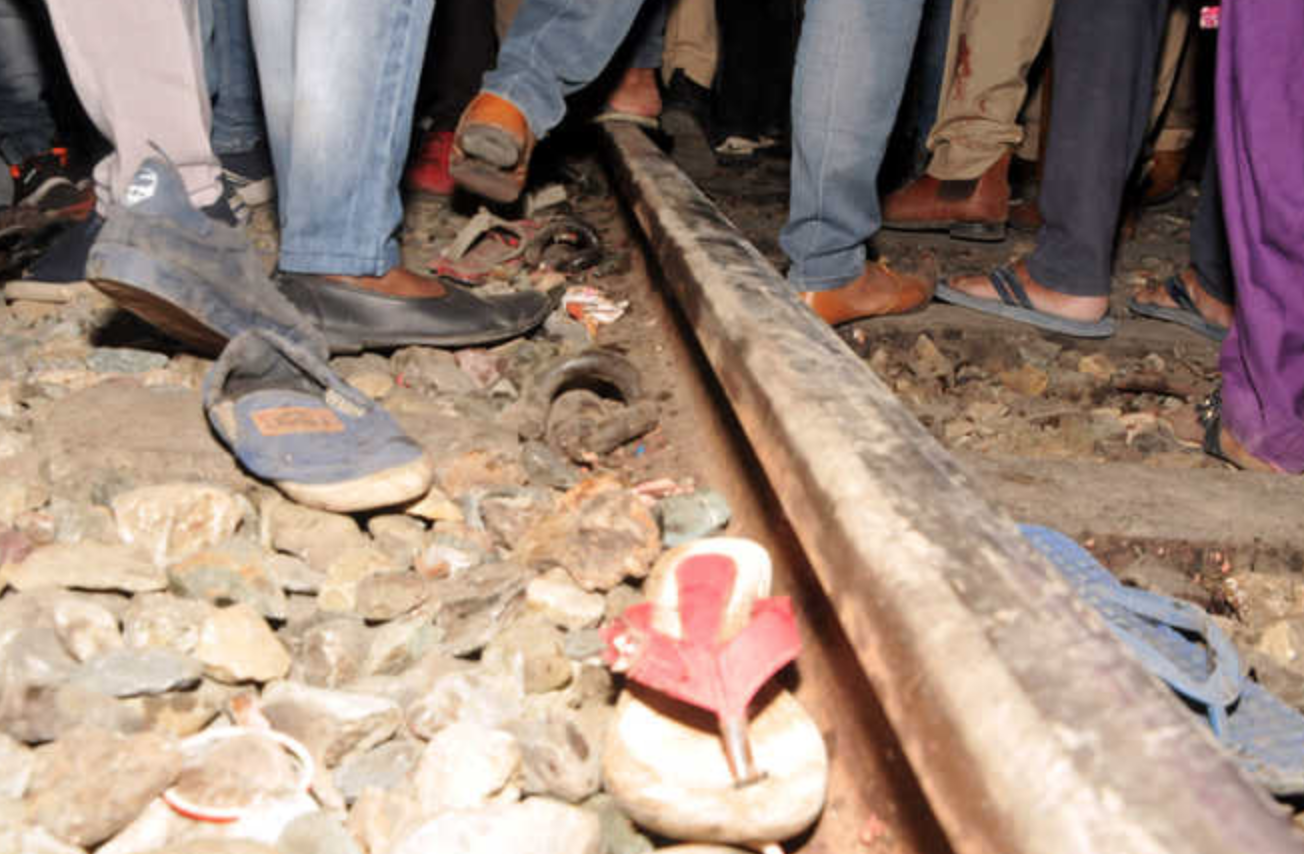 Abandoned footwear of victims seen at the site of the accident.

New Delhi/Chandigarh/Amritsar: Around 60 people were killed and nearly a 100 injured when a speeding train ran over a crowd watching Ravan dahan (burning of Ravan’s effigy marking the end of the Ramlila during the 10-day Dussehra festival) in Amritsar, on Friday night. This horrific incident happened near the Joda Fatak railway crossing in the city.

A large group of people had gathered to see the fireworks during the Ravan dahan at the ground near the Joda Fatak crossing and many of them stood on the railway tracks, which were at an elevated ground, to get a better view. The victims were caught unaware as many of them were taking videos of the burning of the Ravan effigy and the sound of the fireworks drowned the sound of the approaching Jalandhar-Amritsar DMU 74643.

The area where this accident happened falls under the Amritsar (East) assembly constituency, which former cricketer Navjot Singh Sidhu, who is now a minister in the Punjab cabinet, represents. His doctor wife, Navjot Kaur Sidhu, was the chief guest at the Ramlila function at the ground near the railway tracks. She is said to have left the spot minutes before the tragedy happened.

Later, she was seen attending and providing treatment in a hospital where the injured had been admitted. Her husband, Navjot Singh Sidhu, visited the hospital on Saturday. Talking to reporters, he said, “It’s one sad and unfortunate incident to happen. It’s necessary to understand it was just an accident and there might be some negligence but was not motivated or intentional.”

The Punjab chief minister, Captain Amarinder Singh, ordered a magisterial inquiry to find out the exact cause of the train accident, on Saturday, after visiting the injured and family of the people who were killed in this tragedy. Talking to the media, he said four weeks have been given for the submission of the final report and pinpoint the culprit behind this tragedy.

He also ordered an immediate release of Rs 3 crore as ex-gratia payment for the families of those killed. He said the government will provide Rs 5 lakh to family of deceased and also provide free treatment to the people who were injured in private and the government hospitals.

Officials at Punjab Police said the driver of the diesel multiple unit (DMU) has been detained and questione. The driver has claimed that his train was given a green signal and he did not have any idea that people were standing on the railway tracks.

The prime minister, Narendra Modi, condoled the loss of life in this tragedy, on Friday, and also directed officials to give immediate assistance to the victims.

Punjab declared a day of mourning for the tragedy, on Saturday, and all government offices and educational institutions remained closed for the day.