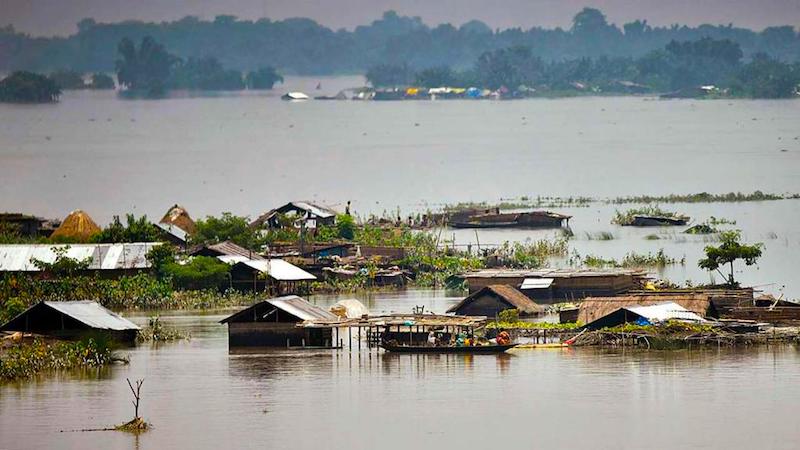 New Delhi: The flood situation in Assam has worsened with large parts of the state remaining inundated in the monsoon deluge, on Tuesday. The seasonal floods, which started about a month ago, has so far claimed 87 lives in the state, according to officials.

According to the Assam State Disaster Management Authority (ASDMA), over 24 lakh people have been affected and crops in 109,600 hectares in the 24 districts have been damaged.

Apart from the toll on human life and property, a large number of domesticated and wildlife animals have also perished in the floods. The Assam forest department and ASDMA said at least 116 animals have been killed in floods and 143 animals rescued. The dead animals include several one-horned Indian rhinoceros.

Each and every life matters.
The amount of resilience our animals are showing every year is incredible and unimaginable.
They are already under tremendous stress.
Please don’t disturb them.
Wildanimals need “NOT SYMPATHY BUT RESPECT ”#Respectwildlife #KAZIRANGA #flood pic.twitter.com/7wduRQ7StD

The ASDMA said apart from the Brahmaputra, eight other major rivers – Beki, Dhansiri, Gaurang, Jia Bharali, Kopili, Kushiyara Sankish, and Siang – are flowing above the danger mark in 12 districts of the state.

The flood situation in Meghalaya has worsened in the last few days. Five children and a teenage girl have reported died in the state’s West Garo Hills district.

The Centre has assured all assistance to the state. The Union home minister, Amit Shah, called the loss of life “very disturbing”. The West Garo Hills district includes plain areas that are connected to Assam’s flooded districts of Dhubri, Goalpara and South Salmara Mankachar.

Meanwhile, the United Nations has offered its help to India to deal with the floods in the northeast, if required.

Stephane Dujarric, spokesman for the UN secretary general, Antonio Guterres, said, “Nearly four million people have been displaced in Assam, India and neighbouring Nepal due to heavy flooding from monsoon rains, with the death toll at 189. The United Nations stands ready to support the government of India if required.”