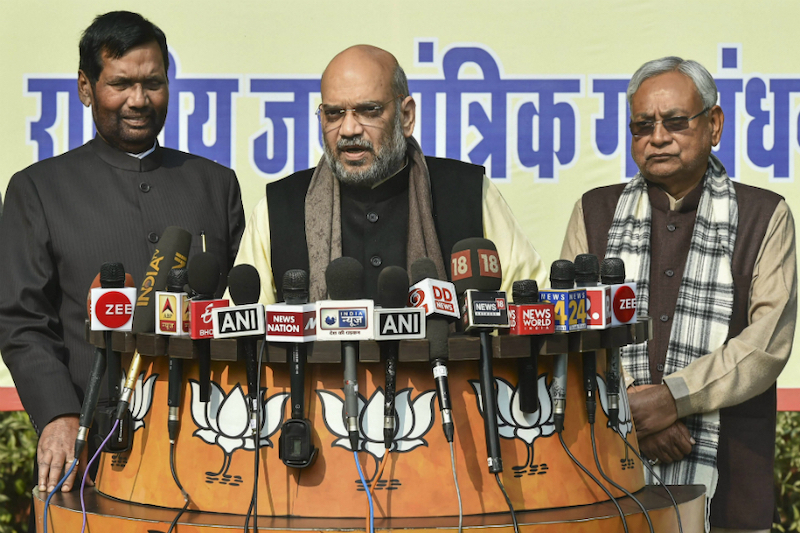 New Delhi: The Bharatiya Janata Party along with Nitish Kumar’s Janata Dal (United) and Ram Vilas Paswan’s Lok Janshakti Party – the other two partners in the Bihar National Democratic Alliance – named the Lok Sabha constituencies in the state from which they will contest, on Sunday.

The state has 40 Lok Sabha Constituencies in total, of which BJP and JD(U) will contest 17 each with the remaining six going to the LJP.

The remaining six seats from which the LJP will contest are: Hajipur, Samastipur, Jamui, Nawada, Khagaria and Vaishali.

Rumblings within the BJP over sharing and ceding seats to the partners had started even before the formal announcement was made.

Siwan BJP MP Om Prakash Yadav did not hide his disappointment and said his party shouldn’t have ceded the Siwan to Nitish Kumar’s party. Another sitting BJP MP, Satish Chandra Dubey, who represents Valmikinagar in the Lok Sabha, declined comment, although he is reported to be very upset about the move.

Meanwhile, Lalu Prasad’s Rashtriya Janata Dal-led mahagathbandhan (grand alliance) is yet to finalize seat-sharing deals with the Congress, the Left and other parties. However, according to sources in these parties, some announcements can be expected after Holi.

Bihar will have a seven-phase election, which will start from April 11.