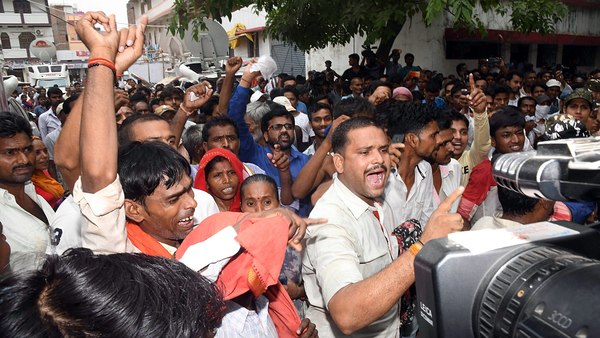 New Delhi: Bihar Chief Minister Nitish Kumar, on Tuesday, visited Muzzaffarpur district for the first time since an outbreak of Acute Encephalitis Syndrome 17 days ago and met by a crowd of angry parents and protesters chanting “wapas jao (go back)”. Protesters’ outrage was at the delayed visit and that the alleged hospital officials cared more about that than caring for patients.

One of the protesters said, “This is today's development (pointing to a water tanker). Things are being spruced up so that it makes a favourable impression on the chief minister. Had the CM visited earlier, it would have made the concerned people pull up their socks and many lives could have been saved.”

The death toll is steadily rising with as many as 126 children losing their lives, so far, after falling prey to Acute Encephalitis Syndrome.

SK Shahi, the medical superintendent of SKMCH, said, the chief minister, who was accompanied by deputy chief minister Sushil Kumar Modi, was “satisfied” by his interaction with patients and relatives.

He said, “The Chief Minister met the patients and their relatives. He was satisfied with the present medical treatment being provided and ordered us to release a bulletin daily at 3 pm. He was pained by the fact that adequate facilities for treatment were not available here.”

Kumar earlier announced an ex-gratia of Rs. 4 lakh each to families of the deceased, free ambulance services and that patients coming to the hospital in private vehicles would be reimbursed at a flat rate of Rs. 400.

He also added that medical expenses would be borne by the government.

Meanwhile, Union health minister Harsh Vardhan chaired a high-level meeting and directed the establishment of virological labs across the state and the setting-up of a 100-bed pediatric Intensive Care Unit at the Sri Krishna Medical College and Hospital.

However, after the petitioner’s counsel sought an urgent listing, the Supreme Court, on Wednesday, agreed to hear a writ petition on the deaths of children in the district due to an outbreak of the disease.

A vacation bench, comprising of justices Deepak Gupta and Surya Kant, agreed to hear the plea, filed by advocate Manohar Pratap seeking direction to the Centre to urgently constitute a team of medical experts for treatment of children who have been affected by AES in Bihar, on Monday, June 24.

The Plea said, “The deaths of children are a direct result of negligence and inaction on the part of the respective state governments of Bihar, Uttar Pradesh and Union of India in handling the epidemic situation which arises every year due to the outbreak of AES.”