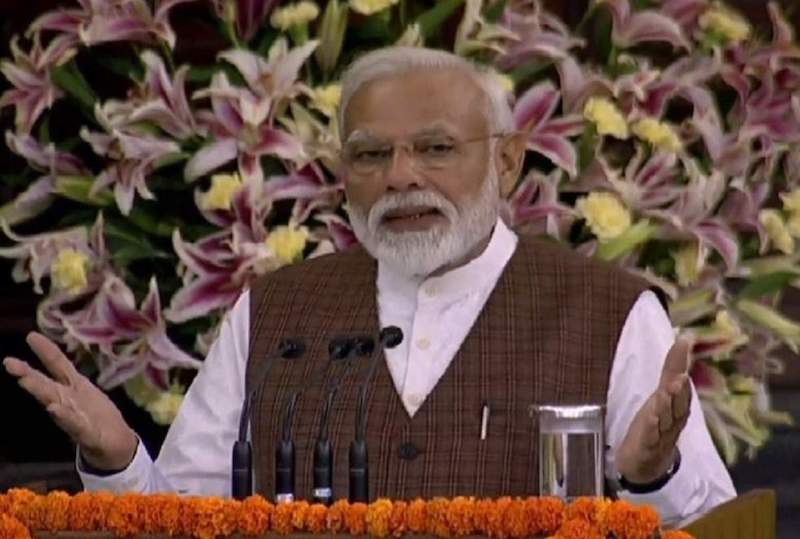 New Delhi: After winning the Lok Sabha election with a massive mandate, a meeting of the National Democratic Alliance was held in the Central Hall of Parliament, which, once again, elected Narendra Modi as the Prime Minister of the country unanimously. During his 75-minute speech addressing the newly elected NDA members of Parliament, Modi advised the MPs to exercise restraint while speaking in public.

Modi said people have trusted him and put their faith in his government and that’s the reason why his government was re-elected with such a mandate. He said, “Only when there is faith (on the government), there is a pro-incumbency wave. It is bound by faith only. People voted (for us) because they wanted to bring our government. Such positive thinking has given us such a big mandate.”

During his speech, he said several things that indicated what would be his agenda for the next five years.

Talking about minorities, Modi said they were kept confused and intimidated. He said it would have been better if education, healthcare were the main issues of the minorities. He said he will work towards debunking the hoax that the minorities are living in an atmosphere of fear. He said he has come to talk about development – everyone’s development.

He said his slogan for his government this time will be “sabka saath, sabka vikas, sabka vishwas” (collective efforts, inclusive growth and everyone’s trust). Modi also vowed to junk the policy of appeasement.

Modi said, “In 2014 I said that my government is dedicated to the dalits, oppressed, exploited and the tribes of this country. For five years between 2014 to 2019, we didn’t allow this resolve to disappear. The poor of this country were being deceived. We had been able to punch a hole in this deceit.

Saying that the minorities of this country are being deceived, Modi said, “I expect to demolish this deception and win their (minorities’) confidence in 2019.”

He said, “Considering the Constitution as a witness, we should resolve that all sections of the country should be taken to new heights. There should be no discrimination on the basis of caste, creed or faith.”

Giving a lecture of dos and don’ts to the first-time MPs, he said they should also stand in queues like other citizens if they needed and cities an example of standing in queues for frisking in airports.

On giving ministerial portfolios to MPs, he said they will be given on the basis of merit and skill of the MPs. Modi also advised NDA leaders to exercise restraint in communicating with the media and said that some statements made publicly have often troubled his government.

The full video of Narendra Modi’s speech in the Central Hall of Parliament: