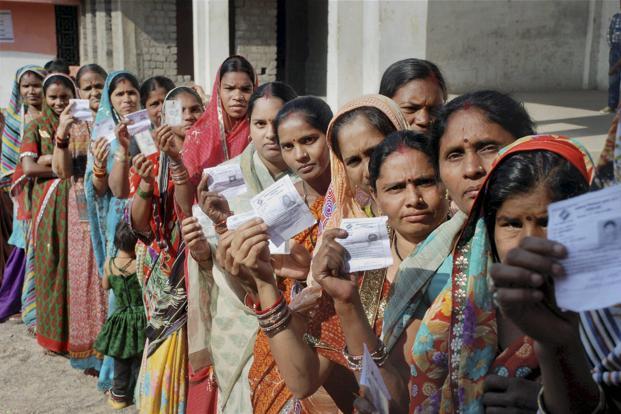 Voters queue outside the polling booth to cast their vote in Raipur.

Bhopal: The second and final phase of polling in the Chhattisgarh assembly election concluded on Tuesday. This phase recorded nearly 72 per cent of voter turnout. According to the polling percentage announced by the Election Commission, the first phase polling has recorded 76.28 per cent that was held on November 12 and the average voting percentage of this year in the state is 74.10 per cent.

The chief electoral officer (CEO) of Chhattisgarh, Subrat Sahu, has confirmed that the voting process was carried out peacefully and no unwanted incident was recorded.

The second phase polling was held for 72 seats spread across 19 districts.

He has further assured that the voting percentage for second phase is likely to go up as these figures are provisional. “These figures have been collected at 6pm. The final polling percentages will increase further as there were queues outside polling booths even after 6pm,” he said.

The prominent leaders whose fate in this election would be decided in the second phase are Congress chief Bhupesh Baghel (Patan), leader of opposition in the assembly TS Singh Deo (Ambikapur) and former Union minister Charandas Mahant (Shakti). Former chief minister Ajit Jogi is contesting from Marwahi, his wife Renu Jogi from Bilaspur district’s Kota and his daughter-in-law Richa Jogi, who is a BSP nominee, from the Akaltara.

The results of the polling will be declared on December 11.