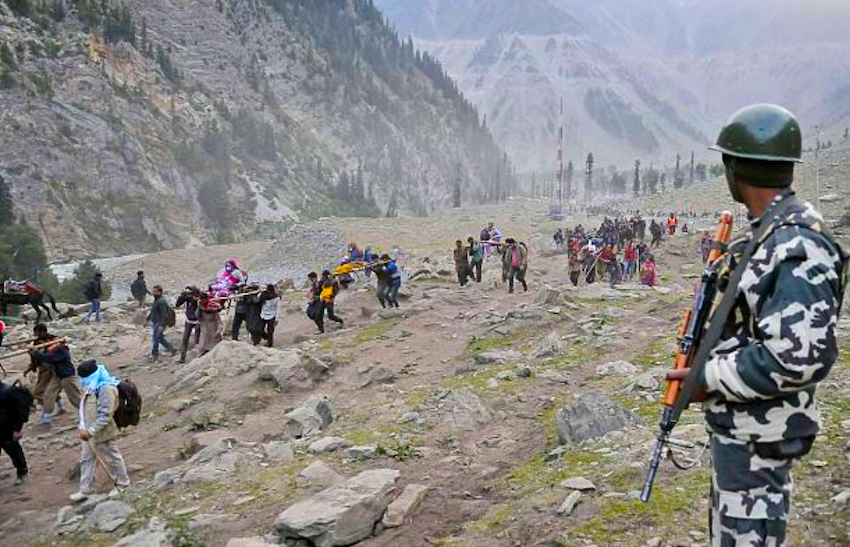 A paramilitary soldier keeps vigil as pilgrims trek to the Amarnath cave.

New Delhi: The heavy security measures undertaken for the annual Amarnath yatra, which commenced earlier this week in Jammu & Kashmir, have drew criticism from the locals for the inconvenience they are facing in their daily lives. The ban on civilian traffic on highway and suspension of train services in the wake of yatra has irked many civilians in the valley.

Earlier, the civilian traffic on highway was banned for two weeks during general election in the May. Around 40,000 paramilitary personnel along with Jammu & Kashmir Police and Army have been deployed and 100 bunkers have been built on the highway to ensure the security of the pilgrims of the annual Amarnath yatra. The railway service between Qazigund and Banihal station has also been suspended.

While labelling the yatra as religious affair unnecessarily turned into military exercise, locals are disappointed over the extraordinary security measures.

Shah Faesal, a former IAS officer-turned-politician, tweeted, “First time in last 30 years SXR-JMU NH was closed to civilian traffic during election. Now closed again for yatra. Those signing orders to stop movement of locals must remember that there will be a day of reckoning. We welcome Yatris to land of Shiva. But this curfew must end. [Sic]”

Gowhar Geelani, a senior journalist and political commentator, said, “Putting civilians to such unprecedented inconvenience, first during the Lok Sabha election and now for the yatra, is a clear message that Unionists have failed to even restore basic dignity to the life of a Kashmiri.”

Amarnath yatra has always been targeted by the militants. At least 12 Amarnath yatra pilgrims have been killed in a terrorist attack on the bus near Anantnag district on July 10, 2017 last year.