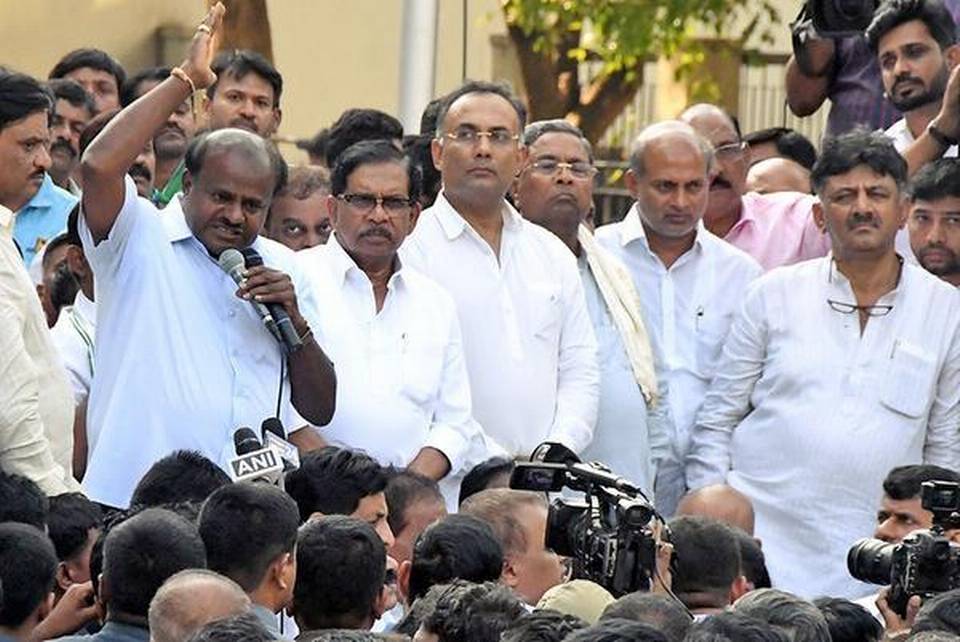 New Delhi: After the income-tax department expanded their searches and raids in Karnataka and reached the state junior irrigation minister CS Puttaraju’s house at Chinakurali in Mandya district, chief minister HD Kumaraswamy and former chief minister Siddaramaiah led a group of senior state cabinet ministers and staged a protest, on Thursday evening, in front of the offices of the I-T department’s Bengaluru office.

The I-T searches, coming just 20 days ahead of the Lok Sabha election, linked to leaders of the Janata Dal (Secular) and their associates across six districts in south Karnataka had triggered a political storm. The searches were conducted in Bengaluru, Mandya, Mysuru, Hassan, Chikkamagaluru and Shivamogga.

The ruling JD(S)-Congress ruling coalition condemned the Bharatiya Janata Party at the Centre for “misusing central agencies”, like I-T Department, for political reasons. They alleged that it was an unprecedented move to create an environment of fear against the opposition.

Congress and JD(S) activists who tried to storm the I-T office were arrested but later released as the protest led to massive traffic jams.

However, former chief minister and Karnataka BJP chief BS Yeddyurappa, in I-T department’s defence, clarified that the searches are not politically moved as BJP-linked people are being searched too.