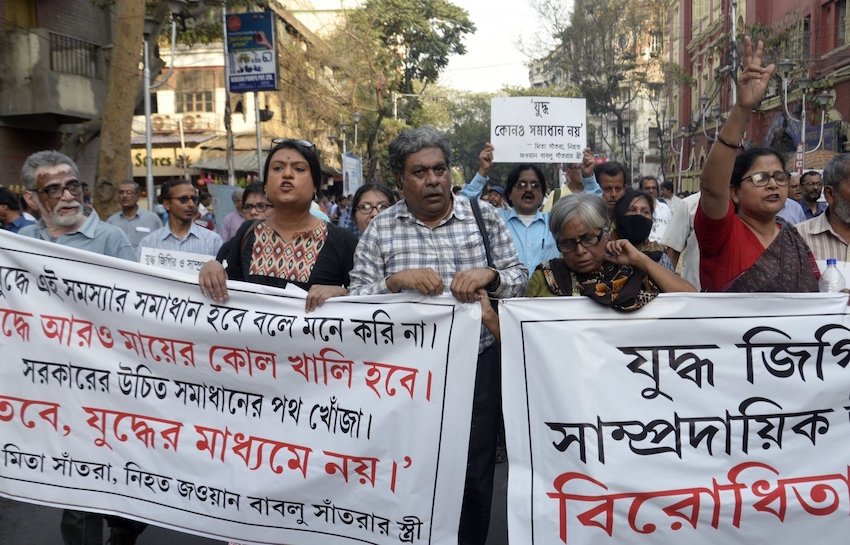 APDR members during the anti-war March in Kolkata.

New Delhi: Members of a rights group called the Association for Protection of Democratic Rights was attacked in the city during an anti-war rally by a group of men who accused them of being sympathizers of terrorists, on Wednesday. This comes in the wake of the Pulwama terror attack, which killed over 40 CRPF personnel.

The men tried to block the march and called the rallyists “anti-nationals” and asked them to “go to Pakistan”. The police had to intervene and remove the men from the spot.

APDR, who shouted slogans demanding peace between nations during their 2.8km march between College Street and Esplanade in the heart of Kolkata, claimed that the BJP and the RSS was behind the attack.

APDR activist Sujata Bhadra said, “The BJP and RSS are behind the attack. We condemn it. We are not afraid of this government (at the Centre). We have every right to present out views. We hope police will take stern action against such criminals.”

Denying the allegations, RSS leader Jishnu Basu said, “It has become a fashion to blame us for everything.”

BJP state president Dilip Ghosh also said, “When the entire country stands united in fight against terror, any organization that takes out such a rally ought to face such backlash from the masses.”

Condemning the attack, chief minister Mamata Banerjee said such acts against activists wouldn’t be tolerated. She asked the police to take stern action against those who attacked the rallyists.