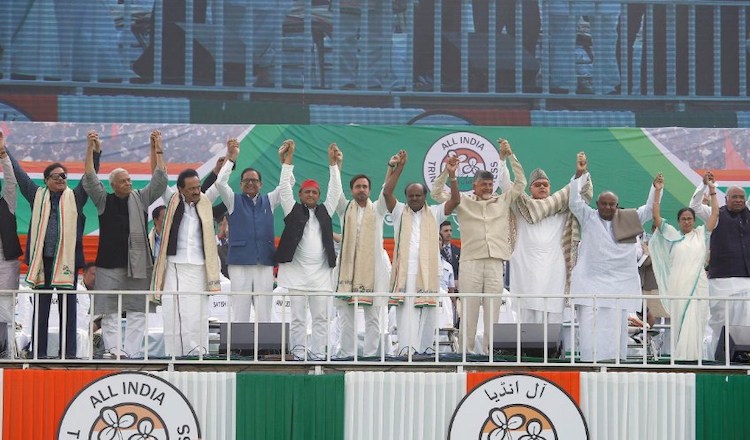 Mamata Banerjee (2R) with other opposition leaders during the United India rally at Kolkata.

New Delhi: Trinamool Congress leader and West Bengal chief minister Mamata Banerjee sounded the bugle for the 2019 Lok Sabha election with a massive show of opposition strength at a rally in Kolkata, on Saturday. At least 20 top opposition leaders attended her rally.

Speaking during the rally, Banerjee said, “Today, 23-24 parties have taken part in this rally … the Modi government is past is expiry date.”

She said, “There is courtesy in politics, but BJP does not follow it. Those who are not with BJP are called thieves. … I want to ask the BJP: do they respect their own leaders? Have you given any respect to Shatrughna Sinha, to Yashwant Sinha? ... what about Rajnath (Singh), (Nitin) Gadkari and Sushma (Swaraj)? The prime minister speaks of collective leadership just because elections are around. If Modi is elected, he will dump all these leaders.”

She also alleged that the BJP has divided the nation by practicing divisive politics. Quoting Delhi chief minister Arvind Kejriwal, who spoke before her, Banerjee said, “What Pakistan could not do in 70 years, it (BJP) has succeeded in doing in just four years.”

On the Citizenship (Amendment) Bill and the Constitution Amendment Bill (to enable reservation for “economically backward classes” in general category), she said, “This govt is trying to change everything – the law, the Constitution, and now this government has to change too. … “Farmers don’t have money. There are no jobs, what’s the point of reservation? We will work together to bring a new dawn for the country.”

On the BJP’s question of the mahagathbandhan’s (grand alliance’s) prime-ministerial candidate, Banerjee said, “All of us our leaders, workers and organizers of the mahagathbandhan. Collective leadership is the need of the hour, unlike the BJP where the prime minister, the president … all are the same person … in our alliance everybody is a leader. There’s no need to discuss our PM candidate now.”

She also said she won’t allow the BJP to hold a rath yatra, as planned and demanded by the West Bengal BJP. She said, “We believe in Lord Jagannath’s rath, Lord Ram’s Rath, Lord Krishna’s Rath. What is your rath? We will not allow you to engineer riots in Bengal in the name of rath yatra.”

Continuing her attack on the prime minister, she said, “Modi is unable to take everyone along. One who can’t take everyone along, can’t be a leader. Haven’t seen anyone run a country in a such a ‘fascist manner’. This is the beginning of BJP’s end.”

Earlier, addressing the rally, SP chief Akhilesh Yadav said, “Those who used to say ‘sabka saath sabka vikas’ have turned one against the other by infusing poison in the country. We will fight together to save the country and the Constitution. In a mocking reference to Prime Minister Narendra Modi’s Varanasi constituency, the SP leader said, “The BJP is now thinking how to win at least one seat in Uttar Pradesh.”

BSP chief Mayawati didn’t make it to the rally. Instead, she sent her part general secretary Satish Chandra Mishra.

Speaking at the rally, the senior BSP leader said BJP. We have to come together to save the Constitution of Babasaheb Ambedkar. The SP-BSP alliance had been formed to defeat the BJP.”

Karnataka chief minister HD Kumaraswamy, while addressing the rally, highlighted how the BJP was trying to “subvert democracy” by trying to buy MLAs and topple his government. He also stressed on how the regional parties have played an important role to safeguard the interests of their states in the last 70 years.

Delhi chief minister Arvind Kejriwal said the BJP has been able to create communal divide in this country, which has been “Pakistan’s dream”. He said the BJP could do in four years what Pakistan couldn’t have done in the past 7o years. Kejriwal also assailed Modi for following people on social media who abuse women online.

Former Prime Minister Deve Gowda accused Modi for “destroying the secular system of the country” by “using all government machinery to create an atmosphere of fear.” Deve Gowda also said there was little time for the opposition and a roadmap had to be immediately discussed for this year’s general election.

Mallikarjun Kharge, who represented the Congress at the rally, said the country currently is under immense pressure with the Modi government “undermining political institutions”. He called for collective effort to defeat the forces that are trying to sabotage the Constitution.

Andhra Pradesh chief minister and TDP leader N Chandrababu Naidu said “We have only one ambition – save India, save democracy … The BJP has betrayed the nation by trying to divide it, but the opposition coalition has been formed to unite the country.”

DMK chief MK Stalin started his rally by speaking in Bengali. He called the rally as the “second freedom struggle”. He said the 2019 Lok Sabha election would serve as a platform to get rid of the Modi-BJP government. He also assailed the government by raising the Rafale deal, fugitive businessmen Vijay Mallya and Nirav Modi. He said the BJP government is “not for common citizens, but for corporates”.  He also called Mamata Banerjee “Iron Lady” and said Modi and Shah “feared entering Kolkata because of her”.

Former Union finance minister and ex-BJP senior Yashwant Sinha also slammed Modi and the government. He said today you are a “deshbhakt (patriot)” if you praise the government and “deshdrohi (traitor)” if you oppose it.  In an oblique remark referring to NITI Aayog downgrading UPA-era GDP growth in the country, he said, “After Independence, this is the first government which has been presenting sexed-up and inflated figures to make fool of people.”

Arun Shourie, another former Union minister and an ex-BJP senior, while speaking at the rally, urged the opposition to work together to remove the BJP government from the Centre in the upcoming general election. He said the opposition parties should unitedly pitch a single candidate against the BJP contestants in the country to win the Lok Sabha election. He said, “We (the opposition) have to have a single aim – that is ousting the BJP in the next Lok Sabha election. Become (the Mahabharata’s) Arjun.”

He said, “It will not be an easy task (to) pitch a single opposition candidate in each seat against the BJP candidate, but we must sacrifice for the country … with a sense of love for it.”

“Rebel” BJP member of Parliament Shatrughan Sinha, who was also present in the rally, launched a scathing attack against Modi and his government. Calling for a change in the government in the upcoming general election, he went on to assail the demonetization, goods and services tax and the Rafale deal.

Borrowing Congress president Rahul Gandhi’s slogan against Modi, he said, “If you keep suppressing facts, people will continue to say ‘chowkidar chor hai’.” He said he was not afraid of being removed from the BJP as he will continue to “speak the truth” and “show the mirror” to the party.

Almost all the opposition leaders who attended the rally spoke about working single-mindedly to defeat the Bharatiya Janata Party in the Lok Sabha election.

After the rally, the leaders met for tea and addressed the media.