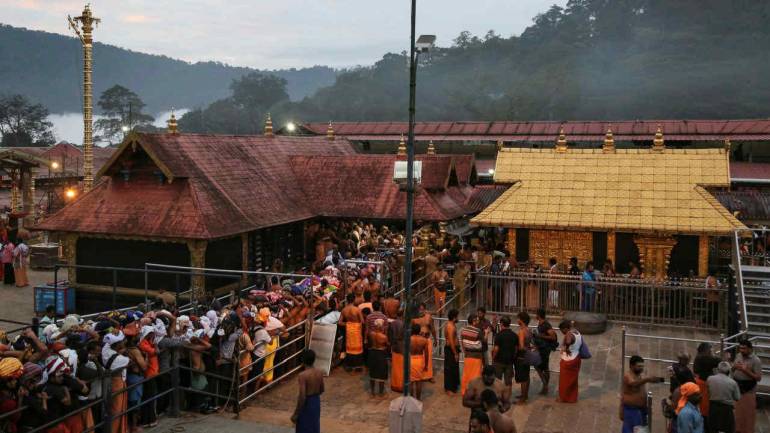 The Lord Ayyappa temple in Sabarimala.

New Delhi: The Supreme Court, on Wednesday, reserved its judgment while hearing the review petitions on its order allowing entry to all women in the Sabarimala Temple. The Travancore Devaswom Board, which runs the Sabarimala Lord Ayyappa temple in Kerala, took a U-turn by supporting its verdict, which had allowed women of all age groups to enter the shrine.

The TDB, which also comprises state government nominees, told a five-judge constitution bench headed by Chief Justice Ranjan Gogoi that it is high time that a particular class not be discriminated on the ground of “biological reasons”. Apart from the CJI, the bench included Justice RF Nariman, Justice AM Khanwilkar, Justice DY Chandrachud and Justice Indu Malhotra.

During the hearing, on Wednesday, the Kerala government submitted before the Supreme Court that exclusion of women is “not essential to Hindu religion”. The state government made its submission during the hearing of the review petitions against the court’s Sabarimala order allowing women entry into the hill shrine.

When the only woman judge on the bench, Justice Indu Malhotra, who was also the part of the bench that issued the order on Sabarimala temple, reminded senior advocate Rakesh Dwivedi, who was appearing for the board, that the board had earlier argued against the entry of women to the temple. To this Dwivedi replied, “The board has decided to respect the court’s verdict,” adding, “… Equality is the dominant theme under the constitution and the practice violates equality. Spirit of the judgment is equal treatment to a man and woman, Women can’t be excluded based on biological attributes.”

While speaking to reporters later, TDB president A Padmakumar said, the board accepts the top court’s September 28 verdict and believes that there should not be any discrimination.

Padmakumar said, “Based on the verdict, we have decided not to file a review petition. The board accepts the SC verdict and if of the opinion that there shouldn't be any discrimination.”