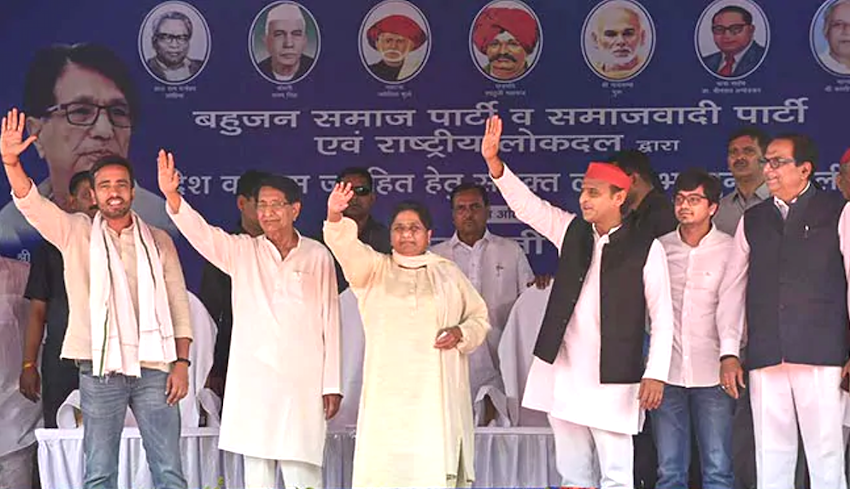 UP mahagathbandhan leaders in Deoband.

New Delhi: The combined show of strength by the three powerful regional parties – Samajwadi Party, Bahujan Samaj Party and Rashtriya Lok Dal – in Deoband, on Sunday, pulled lakhs of loyalists from the three parties the rally where Mayawati, Akhilesh Yadav and Ajit Singh shared the stage for the first time.

The huge sea of people, which included Muslims, jats, jatavs and yadavs, gathered to hear the three leaders, one of who could be the prime minister with some luck.

Addressing the rally, BSP chief Mayawati attacked the Congress’s NYAY scheme and said, “If we form a government, we will not just give ₹6,000 but also provide stable employment to every household.” She also urged the Muslim voters not to split their votes by voting for the Congress.

She said, “If the BJP has to be dealt a body blow, then the gathbandhan is the only choice. The Congress is not strong enough to take on the BJP and I want to tell all of you, particularly Muslims, that a vote for the Congress here will only help the BJP. Do not split your votes.”

SP chief Akhilesh Yadav, in his turn, said, “They (BJP) call us ‘milawati gathbandhan’ (adulterated coalition) ... they are drunk on power. This gathbandhan (alliance) is not milawat (adulterated), this is for mahaparivartan (grand change). This is gathbandhan for electing a new prime minister.”

Both Mayawati and Yadav have acknowledged the suffering of sugarcane farmers in their speech.

Unemployment was reported to be another cause of resentment among the locals against the BJP. While complaining about unemployment and hunger, people were claiming that the BJP did not fulfil any promise, however, they are under more debt than before.

Local supporters said although they don’t have anything against the Congress, they would not “waste” their votes by voting for the grand old party. They said that the SP-BSP-RLD alliance has already fielded good candidates and since the alliance looks the most formidable against BJP, that’s where they will vote.