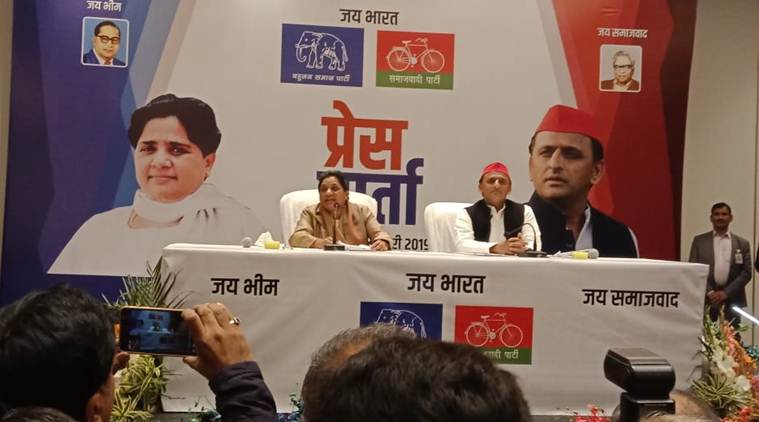 Mayawati (L) and Akhilesh Yadav during their Saturday news conference in Lucknow.

New Delhi: After the Saturday announcement of Bahujan Samaj Party chief chief Mayawati and Samajwadi Party chief Akhilesh Yadav that they were forming an alliance in Uttar Pradesh for this year’s Lok Sabha election and the subsequent announcement by the Congress that it would contest all the 80 Lok Sabha seats in the state, smaller parties intensified alliance talks with all the three.

Nishad Party president Sanjay Nishad claimed he will be given seats to contest from SP’s share of 38 and Shivpal Yadav’s Pragatisheel Samajwadi Party said, on Sunday, it has established a “siddhantik sahmati (in principle agreement)” with the Congress.

Sanjay Nishad also added, “Let the media speculate. I have already talked to them (SP) and in a day or two, things will be clear. We are going to have a meeting soon. The SP will give us seats from its share.”

Deepak Mishra, a PSP spokesman, said, “After Congress’s news conference, it is clear that they want to ally with the secular and socialist parties of Uttar Pradesh. After SP-BSP, who else is that force? A big section of the Congress wants to ally with Shivpal Yadav … It would be too early to say anything. On seat-sharing … that depends on personal relations and bargaining.”

Meanwhile, the Rashtriya Lok Dal has expressed faith upon the SP that the latter will spare seats for it. UP RLD president Masood Ahmad told media that they want the Baghpat, Mathura, Kairana, Muzaffarnagar, Amroha and Hathras seats to contest from. The RLD candidate, Tabassum Hasan, won the Kairana Lok Sabha seat in the 2018 byelection with the help of SP and Congress help when it fell vacant with the demise of the BJP MP from the constituency.