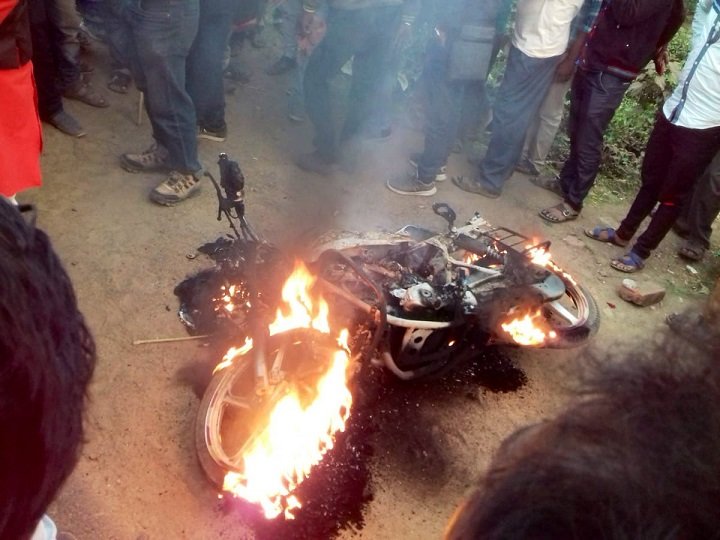 A motorcycle set on fire during the BJP-TMC workers’ clashes in East Midnapore.

New Delhi: Incidents of clashes between workers of the Bharatiya Janata Party and the Trinamool Congress have been reported in Kanthi in East Midnapore district of West Bengal after BJP president Amit Shah’s rally, on Tuesday. Both the parties accused each other for starting the violence.

The BJP has accused TMC for ransacking vehicle ferrying BJP workers to the rally venue and setting it on fire. The BJP leader Rahul Sinha said, “TMC is afraid of our strength, that’s why they committed violence. Unfortunate that everything happened in front of the police … attackers didn’t even spare women workers.”

While rubbishing the allegations of attacking vehicle carrying BJP workers, TMC leader Madan Mitra has said that the BJP had hired hooligans from Jharkhand to attack their own vehicles. He said, “Beginning of the end of BJP as a whole has already started, and it has started from Bengal. The BJP has hired some hooligans from Jharkhand. They are doing this because they have no other issue.”

Home minister Rajanath Singh has expressed concern over the violence that erupted after the rally. According to the officials, Singh has asked West Bengal chief minister Mamata Banerjee over telephone to take strict action against people responsible for the violence.