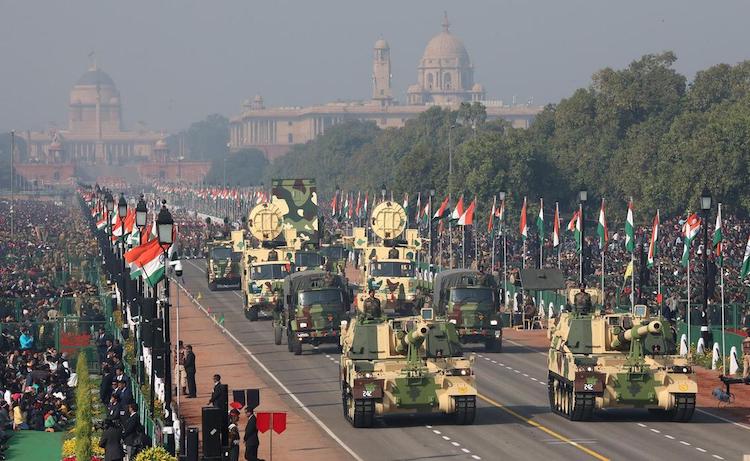 New Delhi: India celebrated its 70th Republic Day with a grand display of military might and rich cultural diversity with the ceremonial parade in New Delhi’s Rajpath.

Before reaching to Rajpath to receive President Ram Nath Kovind and South African President Cyril Ramaphosa, as the chief guest, Prime Minister Narendra Modi paid his tributes to the Indian soldiers who laid down their lives for the country by laying a wreath at Amar Jawan Jyoti at India Gate before the commencement of parade in presence of defence minister Nirmala Sitharaman and chief of the Army Navy and the Air Force.

The theme for the Republic Day celebrations this year is the 150th birth anniversary of Mahatma Gandhi, who championed the idea of non-violence. Tableaux of many states including Sikkim, Delhi, Uttar Pradesh, Gujarat, Punjab, West Bengal, Tripura, Goa, Andaman and Nicobar Islands and Uttarakhand were themed on the preeminent leader of the Independence movement.

The rest of the country too celebrated the Republic Day with great enthusiasm. However, there were a few incidences at some places.

Due to public backlash against the Citizenship (Amendment) Bill, 2016, celebrations of the 70th Republic Day in the northeastern states were muted. The Mizoram governor, Kummanam Rajasekharan, unfurled the national flag and addressed an almost-empty ground in Aizawl with a very small gathering comprising just ministers, legislators and top officials.

While in Assam Police ensured no one carried black cloth to official functions, a shutdown was called by insurgent groups in Manipur leading to low public turnout.

In Nagaland, the Republic Day was celebrated in amid a statewide boycott called by the Naga Students' Federation in protest against the Citizenship (Amendment) Bill 2016. The celebrations, however, were peaceful but there was a low turnout of public in almost all the parade grounds across the state's district headquarters.

In Jammu & Kashmir, precautionary measures was taken on the occasion of Republic Day to prevent any violence the militancy-hit Kashmir valley. Mobile internet services were suspended across the valley and two militants were killed in an encounter with security forces on the outskirts of Srinagar. Some towns and most parts of Srinagar heeded the separatists’ call for a “black day” and most of the shops and businesses were closed for the day.

The full video of the 2019 Republic Day parade in New Delhi: