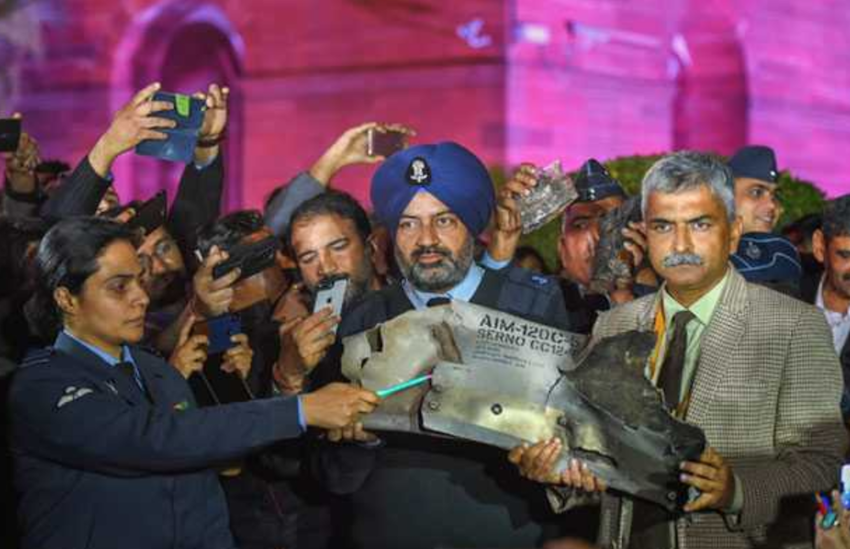 An IAF official pointing to the markings of the wreckage of the AMRAAM recovered from the Indian side of Kashmir.

New Delhi: The debris of AIM-120 C-5 advanced medium-range air-to-air missile (AMRAAM) missile that can only be fired from an F-16 aircraft, were shown in the joint news conference conducted by the Army, Air Force and the Navy, on Thursday, in New Delhi. The parts of the AMRAAM missile had been recovered from east of Rajouri in India in Jammu & Kashmir.

Pakistani warplanes violated Indian airspace, on Wednesday, in an attempt to target military installations in retaliation for Indian air strikes against Jaish-e-Muhammed terror camps deep inside Pakistan, on Tuesday. Indian fighter jets intercepted the Pakistani jets and thwarted their mission.

According to Indian military officials, an Indian Air Force MiG-21 shot down a Pakistani F-16. IAF also lost a MiG-21 and its pilot, Wing Commander Abhinandan Varthaman was captured by Pakistan when he ejected and landed in Pakistan-occupied Kashmir. Pakistan denied that its F-16s took part in the raid.

Air Vice Marshal RGK Kapoor, speaking in the news conference, said, “Pakistan also claimed that F-16s were not used … There is enough evidence to show that F-16s were used in this mission and Pakistan is trying to hide this fact. Also, parts of AIM-120 C-5 AMRAAM missile, which is carried only on the F-16s in PAF, were recovered east of Rajouri within Indian territory. … Pakistan has no other aircraft where AMRAM can be installed ... We can easily say because of the electronic signature that F-16s were used.”

AVM Kapoor also said, “The other lie that Pakistan spread was that it intentionally dropped weapons in open air spaces just to prove a point. The fact is that the Pakistani jets targeted Indian military installations.”

Just a day before, Pakistan had denied use of F-16 aircraft that reportedly shot down by the Indian Air Force when they attempted to violate Indian airspace and attacked military instalments.

The part of AMRAAM missile that was displayed to the media had the contract and serial numbers of the missile. The contract number of the missile was FA8675-05-C-0070 and the serial number was CC12947. The particular missiles were manufactured by the American firm Raytheon and can only be fired from F-16 aircraft that were sold to Pakistan by the United States.

According the Air Force, four F-16 aircraft of Pakistan violated Indian airspace and attempted to attack military instalments on Wednesday morning. from India. While India, in the intense aerial dogfight, has reportedly shot down Pakistan’s F-16 and also lost their Mig-21 in the counter air attack. Pilot Wing Commander Abhinandan Varthaman was captured by the Pakistan army when he reportedly landed on the other side after his aircraft was shot.