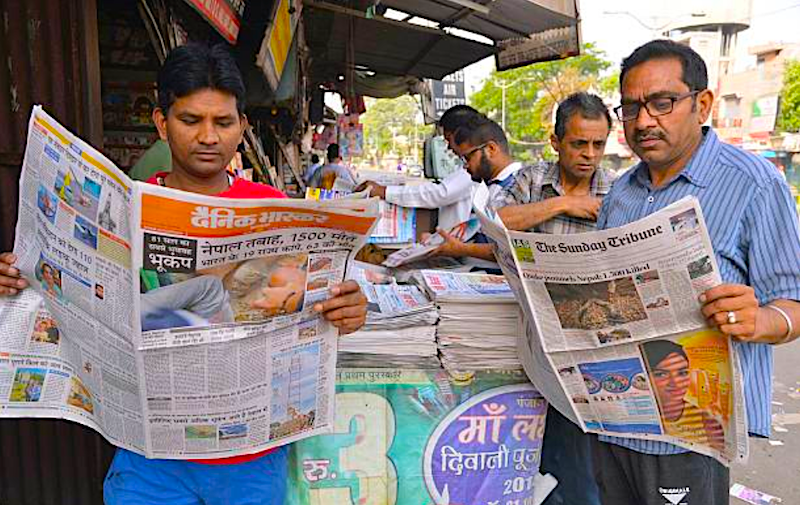 New Delhi: India is ranked 140th out of 180 countries across the world in the World Press Freedom Index 2019. This is a fall of two ranks from the 138th position India was ranked in 2018.

The World Press Freedom Index is released globally by the Reporters Without Borders organization, which comprises reporters and journalists from across the world.

Norway topped the list of having the world’s freest press for the third year in a row, the Reporters Without Borders (RSF) said, while Turkmenistan has been ranked last in this list. It may be noted that Turkmenistan has replaced North Korea in the last spot.

While India is ranked 140, India’s neighbour China slipped from 175th to 177th postion. Among India’s other neighbours, Pakistan is ranked 142, Nepal 106, Bangladesh 150 in this list.

The United States has ranked 48th in this report. While pointing out US President Donald Trump, the report claims: “The first year of President Donald J Trump’s presidency has fostered further decline in journalists’ right to report. He has declared the press an ‘enemy of the American people’ in a series of verbal attacks toward journalists, attempted to block White House access to multiple media outlets, and routinely uses the term ‘fake news’ in retaliation for critical reporting.”

On India, the report says: “Violence against journalists – including police violence, attacks by Maoist insurgents, and reprisals by criminal groups or corrupt politicians – is one of the most striking characteristics of the current state of press freedom in India.”

According to this report, “at least six Indian Journalists were killed with their work in 2018.” It said, “These murders highlighted the many dangers Indian journalists face, especially those working for non-English-language media outlets in rural areas.”

This report said: “Attacks against journalists by supporters of Prime Minister Narendra Modi increased in the run-up to general election in the spring of 2019. Those who espouse Hindutva, the ideology that gave rise to Hindu nationalism, are trying to purge all manifestations of ‘anti-national’ thought from the national debate.”

The report further said, “The coordinated hate campaigns waged on social networks against journalists who dare to speak or write about subjects that aggravate Hindutva followers are alarming and include calls for the journalists concerned to be murdered.”

Significantly, the report mentioned the “#MeToo” movement. It said: “The emergence of a #MeToo movement in the media in 2018 has lifted the veil on many cases of harassment and sexual assault to which women reporters have been subjected.”

On Kashmir, the report criticized the government. It said, “Foreign reporters are barred from Kashmir and the internet is often disconnected there. When not detained, Kashmiri journalists working for local media outlets are often the targets of violence by paramilitaries acting with the central government’s tacit consent.”