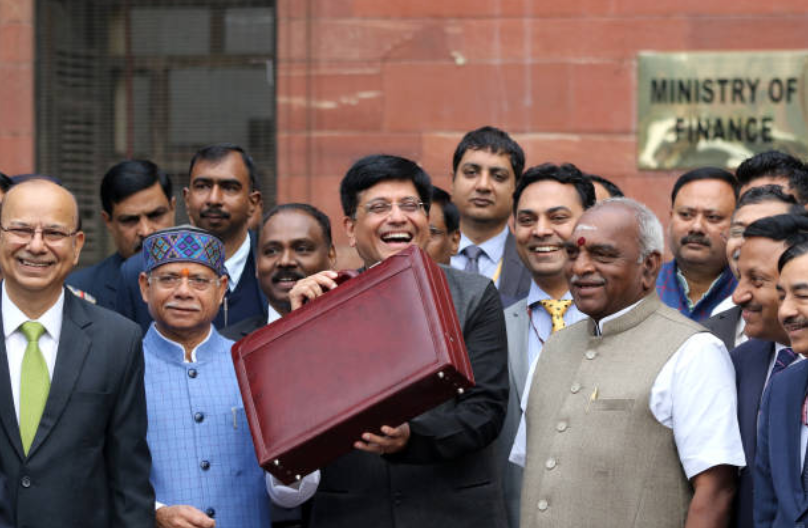 Piyush Goyal (with briefcase) before presenting the interim Budget.

New Delhi: The Narendra Modi government, on Friday, has presented the interim Union Budget for 2019-20 that primarily focused on wooing the middle class, workers from the unorganized sector and farmers, ahead of this year’s Lok Sabha election, which is about two months away. Acting finance minister Piyush Goyal presented the interim Budget in the absence of finance minister Arun Jaitley, who is in the United States for cancer treatment.

The “election budget”, as it was called by the opposition parties, offered direct cash transfer of ₹6,000 per annum for farmers who own land less than two hectres. Another prominent announcement in the budget was total tax exemption for the middle-class taxpayer who earns up to ₹5 lakh per annum.

The Budget proposes that under the Pradhan Mantri Kisan Sanman scheme, farmers owning less than two hectares of land will be entitled to ₹6,000 annually. The amount will be directly transferred to their accounts in three instalments. Around 12 crore small and medium farmers will be benefited under the scheme. The scheme will cost the exchequer ₹75,000 crore per year.

For the middle class, the tax exemption limit has been doubled to ₹5 lakh from the next financial year. This will benefit over three crore salaried class, pensioners, self-employed people with small businesses. Although, there is no tax benefit for people earning more than ₹5 lakh annually, however, standard deduction, has been raised to Rs 50,000 from current ₹40,000 giving a nominal relief across all tax payers.

The tax deducted at source limit also has been raised on bank and post office deposits and on income from rent.

Catering for the informal or unorganized working sector, Goyal announced a pension scheme for the workers, called the Pradhan Mantri Shram Yogi Mandhan. Under the scheme, an assured monthly pension of ₹3,000 will be provided to workers in the unorganized sector after 60 years of age. However, to avail of the scheme, workers will have to contribute a small amount monthly up to a maximum of ₹100. The migrant labour and household workers will be benefited under the scheme. Overall, the scheme is expected to benefit as many as 10 crore workers of this sector.

Goyal has announced highest ever allocation of ₹1.58 lakh crore for the railways and Rs 3 lakh crore to defence.

Finance minister has declared establishment of new AIIMS in Haryana. This will be 22nd AIIMS in the country.

Accusing Modi government of luring people for votes by announcing populous schemes, the Congress president Rahul Gandhi said, “Five years of your incompetence and arrogance has destroyed the lives of our farmers. Giving them ₹17 a day is an insult to everything they stand and work for.”