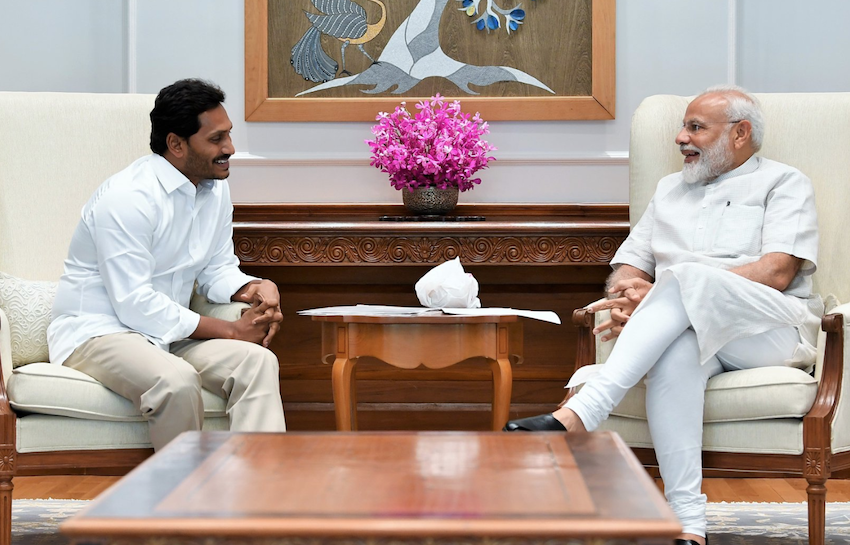 New Delhi: After the announcement of the Lok Sabha and the Andhra Pradesh assembly elections results, the next chief minister of Andhra Pradesh, YS Jaganmohan Reddy, met Prime Minister Narendra Modi, on Sunday. During this meeting, Jagan (as he is popularly called) congratulated Modi and the entire Bharatiya Janata Party-led National Democratic Alliance, which won a massive mandate in the Lok Sabha election. Along with this, Jagan also sought special status for Andhra Pradesh and demanded demanded release of funds from the central government.

Had an excellent meeting with Andhra Pradesh’s CM designate @ysjagan. We had a fruitful interaction on several issues pertaining to AP’s development. Assured him all possible support from the Centre during his term. pic.twitter.com/u7bwPGI4t6

It is being speculated that Jagan’s party, Yuvajana Sramika Raithu Congress, may join the NDA.

Significantly, Jagan’s YSRCP won 151 out of 175 assembly seats and routed the incumbent N Chandrababu Naidu’s Telugu Desam Party. The TDP got only 23 seats in the assembly. YSRCP also performed well in the Lok Sabha election and won 22 of the 25 seats from Andhra Pradesh, while TDP got only 3 seats.

If Jagan joins the NDA, it will give the alliance a two-thirds majority in Lok Sabha, which already has over 350 MPs.

Jagan will take oath as Andhra Pradesh’s chief minister on May 30. He has also invited the prime minister, Narendra Modi, to be present during his swearing-in ceremony.

While addressing the elected MLAs of his party, Jagan also targeted the opposition party leader, Chandrababu Naidu, on Saturday. He has said that the election results in Andhra Pradesh have shown that those people who resort to “unethical and unjust” are punished by the people.

Jaganmohan, who started his political journey from the 15th Lok Sabha in 2009, has been associated with politics for a long time. He is the son of former Andhra Pradesh chief minister YS Rajasekhara Reddy, who died in a chopper crash in 2009. On 29 November 2010, after resigning from the Lok Sabha membership, Jagan had announced that he would form a new political party in 45 days. He announced that his party will be YSR Congress Party. YSR did not mean YS Rajasekhara Reddy. It means “Yuvajana Sramika Raithu” (youth, workers, farmers).