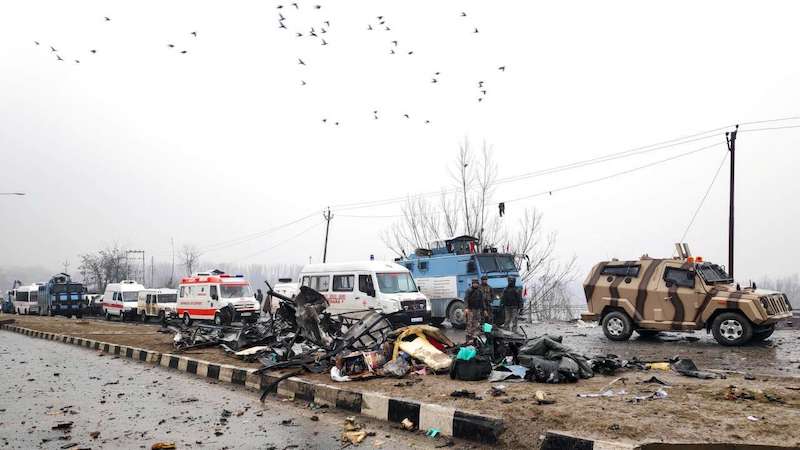 The site of the suicide attack in Jammu-Srinagar highway.

New Delhi: Over 40 Central Reserve Police Force personnel were killed in one of the deadliest terror attacks in Jammu & Kashmir in decades when a Jaish-e-Muhammed suicide bomber rammed a vehicle carrying over 300kg of explosives into their bus, which was a part of a large convoy, in Pulwama. The attack has also left many critically wounded and the death toll is expected to rise further.

More than 2,500 personnel were travelling in the convoy of 78 vehicles. Many of them were returning to rejoin duty in the valley when they were attacked on the Srinagar-Jammu highway at Awantipora around 3.17pm.

Agencies said other terrorists may have also fired at the convoy after the explosion as bullet marks were found on some other buses.

Police identified the suicide bomber as Adil Ahmed Dar who joined the Pakistan-based Jaish-e-Muhammed jihadist group in 2018. The terror group claimed responsibility for the attack that took place about 20km from Srinagar and released a “martyrdom” video of the terrorist, Dar, who carried out the suicide attack.

Cutting across lines, all political parties condemned the attack and called for action against Pakistan for the attack.

Warning of repercussions for the attack, Prime Minister Narendra Modi, in a tweet, said: “The attack on CRPF personnel in Pulwama is despicable. I strongly condemn this dastardly attack. The sacrifices of our brave security personnel shall not go in vain. The entire nation stands shoulder to shoulder with the families of the brave martyrs. May the injured recover quickly.”

The government renewed its appeal to the international community to support the proposal to list terrorists, including Jaish-e-Muhammed chief Masood Azhar, as a designated terrorist under the 1267 Sanctions Committee of the UN security council. For years, China has been blocking India’s moves in the UN to designate Azhar as a global terrorist.

India released Azhar along with two more dreaded terrorists in December 1999 when terrorists hijacked Indian Airlines Flight IC814 from Kathmandu to New Delhi and took it to Kandahar in Afghanistan, which was under Taliban rule then, and demanded their release.